First appearing on Nina Simone’s “High Priestess of Soul” album (1967), “I Hold No Grudge” was suggested to Bettye by its original writer, Angelo Badalamenti, when the two met at a musical benefit organized by filmmaker David Lynch. What Badalamenti had no way of knowing was that Bettye had already been hoping to record his song for years, ever since hearing it at a beauty salon in Detroit.  Bettye relates that, upon listening to her interpretation, Badalamenti sent her a message to the effect of, “I can just see Nina saying, ‘yes, she nailed it.’”

The haunting “One More Song”, written by Sharon Robinson, is Blackbirds’ sole recent composition (2015).  Robinson, known for her collaborations with the late Leonard Cohen, has become one of Bettye’s favorite contemporary writers (an earlier Robinson number, “The High Road,” appeared on 2005’s “I’ve Got My Own Hell to Raise”). Here, working with the great keyboardist, Leon Pendarvis, who stresses the rhythm in a manner suggestive of falling raindrops, Bettye delivers one of her most wrenching performances.

“Blues for the Weepers”, associated with the brassy vocalist, Della Reese, takes listeners into the kinds of smoky nightclubs where Bettye got her start in the 1960s, singing for what the lyrics describe as the “sad-eyed and the gay ones, the real hip-hooray ones.” As such, it speaks to the devotion of the fans she’s built up over the years, while opening a window into her own commitment as an artist: whether it’s been for 20 people in a bar with dartboard and pool table, or for thousands at Carnegie Hall, Bettye has always given all of herself in performance.

For years, Bettye’s husband, Kevin Kiley, has been keeping folders of various songs – organized by theme and category – for her to record. “Book of Lies”, first released in 1958 by Atlantic Records’ mainstay, Ruth Brown, has long occupied a place in the “1950s rhythm and blues” folder.  Underscored by producer Steve Jordan’s drums and some fine work by guitarist Smokey Hormel, the arrangement provides an ideal showcase for lyrics that are both emotive and clever: “every promise you made was a promise broken, and every broken promise broke my heart.”

Lil Green may not be well remembered today, but she was an undisputed pioneer in expanding the roles of African American female artists during the 1940s – a decade in which she wrote and performed her own material. “Romance in the Dark”, her most famous composition, was later covered by two of the “Blackbirds” represented in this collection, Dinah Washington and Nina Simone. In choosing this song, Bettye offers acknowledgement to Green’s independent spirit: “she seemed like such a little, feisty black woman.”

While “Drinking Again” features lyrics by Johnny Mercer, a well-known writer of 20th century standards, its music is the creation of a female composer, Doris Tauber, who once worked as Irving Berlin’s secretary. Mercer and Tauber’s account of a spurned lover, “making the rounds” of late-night bars, is given added poignancy through the incisiveness with which Bettye probes the evocative lyrics.

“Strange Fruit” started life as a poem, written around 1937 by a left-leaning Jewish teacher, Abel Meeropol. Meeropol had been stirred to anger by a photograph, taken in Indiana in 1930, of the lynching of two African American men, who hung from a branch as a white crowd looked to the camera, pointing and smiling. In 1939, Billie Holiday delivered Meeropol’s words, now reconceived as a song, at Greenwich Village’s Café Society.  “Strange Fruit” says much about the history of American racism and the state of the country today. “I really wanted it to be more of a statement than a song,” Bettye explains. “I didn’t care how pretty it was or wasn’t.”

Bettye’s intimate reading of “Save Your Love for Me” qualifies as a highlight of the set.  Composed by an African American bandleader, Buddy Johnson, the song is perhaps most closely associated with Nancy Wilson, who recorded it in 1961. Here, Bettye displays the keen timing, sharp lyrical interpretation, and feeling for dramatics that make her the living embodiment of Verve’s rich legacy of female voices from the 20th century.

A fixture of the Beatles’ White Album, “Blackbird” encapsulates the LaVette approach: reshaping songs to reflect the singer’s own experiences. Though not a religious person, Bettye draws upon the Bible for illustration: “If we go back to David, with the harp, he wrote down these poems first, before he started playing them. The words were from his heart and they were how he felt: ‘The Lord is my shepherd; I shall not want.’ When people say this in church, it’s very personal.  Songs have to become personal to you.”

Hailed by the New York Times as “one of the great soul interpreters of her generation,” five-time Grammy nominee Bettye LaVette is a vocalist who can take any type of song – jazz or country, pop or rhythm & blues – and make it her own. LaVette’s commitment to artistry has earned the admiration of musical peers such as Jon Bon Jovi (“she doesn’t just sing the song, she lives in each of them”) and Bonnie Raitt, who praised her as “one of the most incredible R&B singers singing today…a force of nature.”

Over the course of her remarkable, six-decade career, LaVette has sung for President Obama, published an autobiography, placed six records on the rhythm & blues charts, and starred in a hit musical. And, as proven by “Blackbirds”, her second recording for the legendary Verve label, she continues to scale new artistic heights.

Born Betty Jo Haskins in Muskegon, Michigan, LaVette moved at a young age to Detroit’s North End, where her neighbors included 1950s music stars such as Jackie Wilson. In 1962, at the age of 16, she stepped into a recording studio for the first time and the result was a top 10 rhythm & blues hit, “My Man – He’s a Lovin’ Man.” Released on Atlantic Records, a leader in African American popular music, the song made LaVette an overnight star. LaVette returned to the charts in 1965, with “Let Me Down Easy,” a haunting ballad that for years became her signature song. 1969 brought another hit, “He Made a Woman out of Me” – a classic of Memphis soul that showcased LaVette’s vocal timbre and masterful sense of timing.

After her first full-length album, “Child of the Seventies”, was inexplicably shelved by Atlantic in 1972 (it would finally be released in 2000), LaVette turned to the theatrical stage, appearing in a national tour of Broadway’s “Bubbling Brown Sugar”. In 1982, she signed with her hometown label, Motown, to release “Tell Me a Lie”. The album’s hit single, “Right in the Middle (of Falling in Love),” brought LaVette a new round of critical and popular acclaim.

By the start of the 1990s she had become a regular performer on the UK’s “northern soul” scene, where British music lovers made collector’s items of her 1960s singles. All the while, she was asserting herself as a contemporary artist: 2003’s “A Woman Like Me” won the W.C. Handy Award for “Comeback Blues Album of the Year”.

The success of “A Woman Like Me” marked the onset of LaVette’s career revival. In 2005 she signed with ANTI-Records for “I’ve Got My Own Hell to Raise”, a collection of songs from female writers. Three ANTI-releases followed, along with several events that rank as career highlights. In 2006 she received a Pioneer Award from the Rhythm & Blues Foundation. Then, in December 2008, LaVette delivered her rendition of the Who’s “Love Reign O’er Me” at the Kennedy Center Honors, as the audience watched in astonishment. The following January, she performed “A Change Is Gonna Come” with Jon Bon Jovi as part of Barack Obama’s inaugural celebrations.

“Things Have Changed”, an album of Bob Dylan songs produced by Steve Jordan, marked LaVette’s Verve debut in 2018. It received two Grammy nominations. “Blackbirds”, whose release will coincide with LaVette’s induction into the Blues Music Hall of Fame, represents a further step in her artistic evolution. Working again with producer Jordan, who also plays drums, and a group of celebrated musicians (Smokey Hormel on guitar, Monty Croft on vibes, bassist Tom Barney and veteran keyboardist Leon Pendarvis), LaVette delivers impassioned readings of songs associated with African American female vocalists of the 1950s. In curating the songs for “Blackbirds”, LaVette has established a dialogue with the great women who preceded her while reaffirming herself as a vital, living presence. 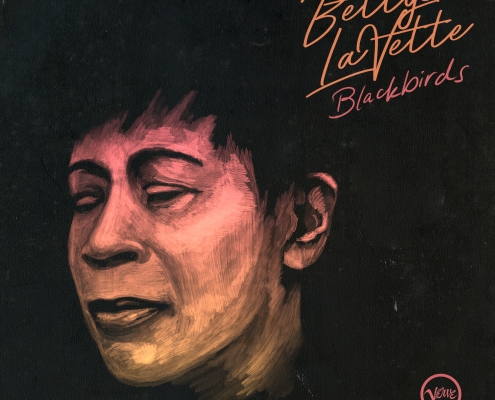