Charles Lloyd has played the 150-year-old adobe theater in downtown Santa Barbara more often than any other venue, and more often than any other performer. Knowing that Marian Anderson sang there on February 14, 1940 makes it a sacred space for him. In the concert film you can see him bobbing with pleasure beneath his pointy, indigo knit cap, curly white hair, and long goatee. He beams at his neighbors, places the palms of his hands together and pulls them against his black sweater and golden tenor saxophone in the traditional Buddhist greeting. “I always get nervous before I go on,” Lloyd confesses, “but once I get on, Dorothy [Darr] has to come and drag me off. It seems that once I’m on stage I get met by the spirits. I enter the now. Sometimes Prez and Bird will stop by and say, ‘Hi, Charles.’”

A birthday is a door between the past and the future, and this concert reflected that truth. Representing the future were 34-year-old pianist Gerald Clayton, who performs regularly with Lloyd, and 31-year-old guitarist Julian Lage, who had performed with him when he was 12-years-old. Representing the past was 74-year-old organist and fellow Memphis native Booker T. Jones, who had never played with Lloyd at all. This was a one-of-a-kind line-up for a one-of-a-kind ritual.

“I’ve known Julian since he was 12,” Lloyd says. “He’s from the Healdsburg area, and Jessica Felix, who runs the jazz festival there, asked if Julian could play with us during the festival in 2000. Billy Higgins and John Abercrombie were in the group. I knew she wouldn’t ask if he didn’t have something special, so we let him play, and he had something; he had big ears. We’re all seekers in life; we all get the rays of the sun, but some get a stronger dose. A lot of young geniuses flame out and no one remembers their names. But so far, Julian’s balanced: grounded but at the same time ecstatic. Even though he’s the future, he knows the past.”

“Gerald was often back stage when I was touring with the New Quartet. In 2013 when Jason’s other duties became overwhelming, I decided to try out Gerald. His father and uncle are great musicians,” Lloyd says, referring to bassist John and saxophonist Jeff of the Clayton Brothers, “so he comes from something deep. You can hear it when he plays.”

Jones was still in junior high when Lloyd was graduating from high school, so they didn’t know each other when they were both growing up in Memphis. But they both shared the city’s rich cultural heritage, and when they ran into each other at the 2014 Monterey Jazz Festival, they promised to play together at some point. This birthday party was the perfect excuse.

“Memphis was such a rich environment,” Lloyd recalls. “It was like New York City, only with biscuits and gravy. There was an intelligentsia that inspired me to always be a learner. New York was 1300 miles away, and Chicago 450 miles away, but we were on the river, so musicians were always coming through. These out-of-town guys would play the Peabody Hotel and then they’d come over to the joints in our neighborhood to play with us, and we’d put a hurt on them. We didn’t tap dance or do anything for the man. We had our own culture and we knew it was inspired. We knew nothing of the lamb tongues and the gold mines, and I’m so thankful; we were doing it for the music.”

Don Was first made his name as co-leader and bassist of the 1980s funk-rock band Was (Not Was) and went on to produce albums for the Rolling Stones, Bob Dylan, Brian Wilson, Bonnie Raitt, Lucinda Williams, Jason Moran and many more. In 2012, he became president of Blue Note Records and immediately set out to bring his hero Lloyd to the label. By 2015, he had succeeded in his quest and a magnificent series of albums has followed: Wild Man Dance, I Long To See You, Passin’ Thru, and Vanished Gardens.

Harland anchors every project that Lloyd pursues these days—Sangam, the Marvels, the New Quartet—and Rogers is present in every group but the bass-less Sangam. “Eric and Reuben put a magic carpet under me,” Lloyd exclaims, “and I can travel wherever I want to go. They want to be there, and they know that to be there they have to spread their wings in any situation. When we take that journey together; that’s communal living at its highest. Music is not for sleepwalking; it’s for wakefulness. Reuben and Eric understand. My music dances on a lot of shores, and they have the ability to be in the now with all of it.”

The Lobero set list docked at many of those shores. The evening began with the title track from Lloyd’s first album for Atlantic Records, 1966’s Dream Weaver. This infectious reverie begins with breathy exhalations and ends the same way 20 minutes later, but in between, Lloyd’s tenor saxophone attacks the theme with an increasingly edgy fearlessness—and Lage and Clayton follow his example.

“‘Dream Weaver’ is sacred ground to me,” Lloyd says. “That record was fresh and crazily beautiful. It has withstood the passage of the ages. I started playing it again and found new ways of expressing the truth. There are some notes on the saxophone I didn’t have as a young man. They aren’t on the horn; they’re in between the cracks. I’m not denying the young Charles, but as my character becomes whole, the music gets better.” If that tune reached back to the beginnings of Lloyd’s career, the next three came from his much-lauded resurgence in the 1990s through the 2010s on ECM. “Requiem,” which first appeared on 1992’s Notes from Big Sur, used patient tempos and pointillist solos by the tenor saxophone, piano, guitar and acoustic bass to create a mood that fits the title.

The Mexican folk song “La Llorona” from 2010’s Mirror (and 2016’s I Long To See You) opens with a piano solo that slowly builds from quiet to majestic and closes with a tenor solo that manages to always reference the melody as it’s sprinting through the octaves. That segues into “Part 5, Ruminations” from 2017’s Passin’ Thru, which begins with a meditative, free-floating consideration of the harmony before cohering into a more definite theme that inspires a stabbing guitar solo, a classically flavored piano solo, a rumbling drum solo and a low-register tenor saxophone solo.

The second set found Clayton sitting out until the encores. Rogers switched from acoustic to electric bass, and Was sat in for two numbers on acoustic bass. Jones contributed two compositions: the premiere of his birthday card “Song for Charles,” and his 1962 hit as leader of Booker T. & the MGs, “Green Onions.” Two Lloyd compositions from the 1960s, “Island Blues” and “Sombrero Sam,” joined the old hymn “Abide with Me” and the American folk tune “Shenandoah.” For the encore, Clayton rejoined the band to play Lloyd’s “Forest Flower” and Billy Preston’s 1974 hit single, “You Are So Beautiful.” 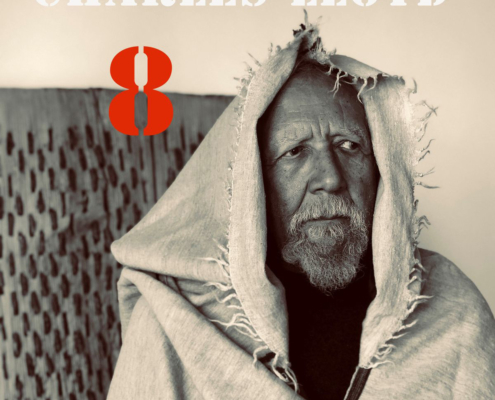