To regard a line of improvisation in the key of Charles Lloyd is to walk a spiral from the peaceful depths of one’s soul to the chaotic terrains beyond it. The tenor saxophone with which he is most commonly associated is a scepter that sounds, in his words, “a clarion call to truth and love.” A tender warrior committed to restoration, he sees no lines of demarcation in his music:

“That wouldn’t be right for the tradition I serve. You must have your elixir, and the elixir is in sound and tone. When you’re at the feet of the Universe, she will always bless and take care of us. It’s not politicians we need but sages. Many have their hand out for something, but I try to let my heart be filled so I want for nothing. I live in awe, drunk with the music.”

Hence the moniker of his latest collective The Marvels—featuring Bill Frisell on guitar, Greg Leisz on pedal steel guitar, Reuben Rogers on bass, and Eric Harland on drums—of whom Lloyd is at once leader and faithful servant, a vessel for languages without script. Lloyd debuted The Marvels on the 2016 album I Long To See You with special guests Norah Jones and Willie Nelson, and reconvened the band for 2018’s Vanished Gardens which featured Lucinda Williams on half the album. For his latest Blue Note release Tone Poem, Lloyd presents The Marvels without guest vocalists for the first time on a nourishing nine-course meal of spiritual food. Lloyd recalls the genesis of the group:

“I used to play at this club in Memphis, where a country band was always finishing up as we came in. Their pedal steel guitar player, Al Vescovo, fell in love with my playing, and I with his. He and I became friends, which wasn’t easy on account of the color lines. But the warmth of our friendship was pure. I eventually left for California, and we never saw each other again. Years later, I started performing with Bill Frisell—a seeker whose music, like mine, dances on many shores. On the road, between concerts, I was always reminiscing with him about this young musician from my teens. One night, he invited a pedal steel guitar player to sit in on a concert we played at UCLA’s Royce Hall. That turned out to be Greg Leisz. Hearing him brought full circle a childhood feeling of that instrument and its sonority. Thus, The Marvels were born, because what had happened was a marvel.”

Indeed, the fluid way in which Frisell and Leisz finish each other’s sentences speaks of a mastery that eschews boundaries in deference to flow. The same holds true of Lloyd’s rhythm section, which finds coherence in the absence of rules. If Harland is the heartbeat, Rogers fortifies the blood in its arteries. But how is that sound achieved?

“Don Was and the folks at Blue Note believe in me. The songs we create are my children. They come back home with me. There’s an old saying: What you’re looking for is looking for you. As the character of sound flows, the world drops away, allowing you to make a contribution. This is my offering, my inspiration and consolation. Music has always brought me that. It heals me; I hope I can heal others. Even in the wide cast of artists I’ve played with over this long life, I still have beginner’s mind. Only now, I have the benefit of experience to go along with it.”

If one were to see this album as a ship, then the album closer “Prayer” might be its dotted path across a map of time. Although the parchment on which it is marked is frayed at the edges, it has enough empty space left on it for voyages of reconciliation yet to come. The arco bass and pedal steel guitar herein constitute a longitude and latitude, while drums played by hand glow like a compass in the night. Lloyd and his crew sail forth on a raft culled from bits of nature, each ragged and sun-scorched on its own yet, in unity with others, stronger than the waves. In the midst of the vast waters of this quest stands a chain of islands that includes the album’s original title track, “Tone Poem,” which from rhythmless materials builds a gently grooving structure. Next, it swings from sonic rafters of Thelonious Monk (“Monk’s Mood”)—last heard in duo with Frisell on Vanished Gardens—and on to the shimmering beaches of Bola de Nieve (“Ay Amor”) and Gabor Szabo (“Lady Gabor”). The latter tune offers a taste of Eastern airs and harks to Lloyd’s legendary performance at Montreux in 1967. Out of the primordial soup of that past, it hits the ground running as a fully formed creature—scintillating and agile. Such is the wonder of Lloyd’s playing: he is a traveler weary of the world yet unwilling to let it pass without a song in which to wrap it. He understands the vision of life as having fallen like a teardrop from a cosmic eye in need of being wiped away. And with his horn, he does just that. This music is so comfortable that it feels like a second skin.

“When I think back on my life and how long I’ve been here. Most of my heroes left long before the age I’ve attained. I am always paying homage in a dream state of bringing a better world, a universe that heals and touches. The model of the world as it exists is very primitive to me. Man’s inhumanity to man continues to cause great pain and destruction.  And yet, the fierceness of exploration stays fresh with me. I’m not here for roses. I’m still blessed and interested. The world continues to make history about generals…but my generals—Lester Young, Billie Holiday, Bird, and Trane—are lovers of the heart.”

This is especially apparent in two Ornette Coleman tunes (“Peace” and “Ramblin’”), neither of which were a part of Lloyd’s repertoire, yet which felt organically suited to the band. In both, the listener will find spirit-making sounds, all powered by the solar panel of Lloyd’s saxophone and released in melodic energy. The sense of forward motion here is phenomenally astute and something that, in these times of social distancing, crackles with a level of intimacy the pandemic has all but snuffed out.

“Some of the notes and cries you hear now on my instrument, I didn’t have as a young man. They articulate something. Then, I have these ensembles serving a higher goal. Sensitives are abundant on the planet; they just aren’t given credit for it. To be drunk while also being non-toxic and non-harmful to the world is a contribution worth making, a song worth singing.”

It’s also why poetry lingers even in the absence of words. In Leonard Cohen’s “Anthem,” it sings wordlessly and with a deep simplicity that needed to be explored in this context. And in the temperance of Lloyd’s own “Dismal Swamp,” it turns an individual truth into a universal one.

“I’m an archeologist and astronomer, trying to make a breakthrough. I have this dream that I’m going to melt into the music and I’ll become what it is. It’s such a beautiful gift that I’ve been given of being able to continue to explore. I pick up the instrument and I play and I can’t put it down. It takes me. I go out in nature and come home with these quantum mechanics in my heart.”

Music, because it is connecting to and opening up a spiritual purpose, brings about eternal effects, whereas everything we do in the flesh has a finite existence. But we’re so busy screaming at each other that we’ve forgotten how to sing. This is why Lloyd’s music has so much vitality: it is a gift in song form. It is a refuge.

“We speak the same heart. The heart of all hearts, we’re aligned with that. And the soul of all souls will bring us home. To be at Oneness. There are many windows into this house. You must be sincere and you must have a desire for truth, and somewhere you must have inspirations along the way, someone to guide you who knows the path. It’s incumbent upon all of us to sing that song of the infinite.”

A “dreamer of worlds” is how Lloyd describes himself. In that capacity, he offers inspiration and consolation to the named and unnamed alike. And now, with this sacred book, bound and stitched as an incantation of light, we can dream those worlds together as our own. 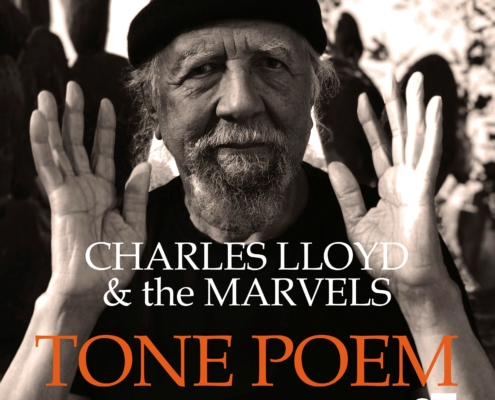 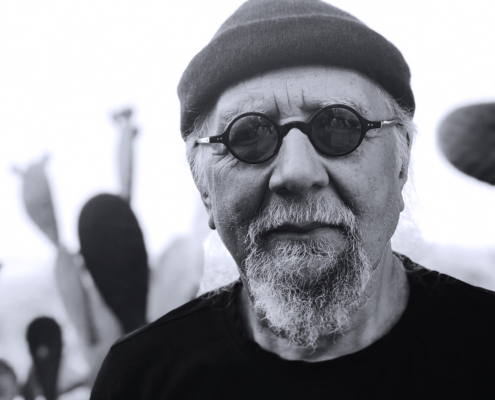 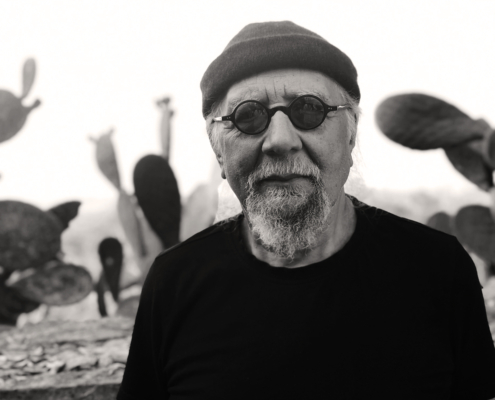 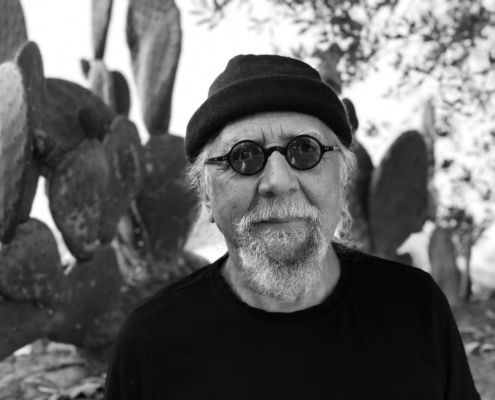 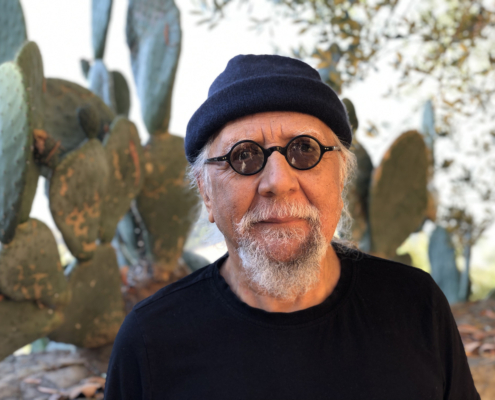 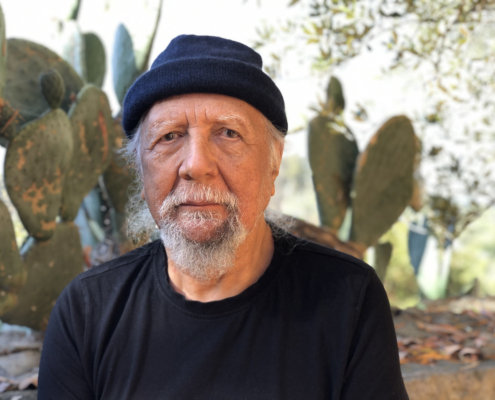