Brazilian guitarist Diego Figueiredo (pronounced „fig-a-reed-o“) lives in, with, and for the music. Some people are simply meant to be musicians. Diego is one. He was born in 1980 in Franca, São Paulo State, and began playing music at four years old. By the age of twelve he had already attracted a local following, and when he was fifteen he was drawing huge crowds around Brazil. Now, in 2019, he has conquered the world. Diego has recorded several albums, both solo and in collaboration with others, and constantly tours all over the globe. He can no longer be downplayed as a „rising star“ among the world’s great (jazz) guitarists – he is now inarguably among the established elite. His skills on his instrument are matched only by his developed ability to move freely between styles, and his sublime technique is paired with an exquisite ability to vary his playing so that it radiates with unwavering excitement. His expressive voice on the acoustic guitar draws inspiration from his home country’s rich musical heritage, but he also has a deep knowledge and sense of jazz’s quirkiness as well as the classic guitar tradition. Diego Figueiredo can play whatever he desires.

COME CLOSER is Diego’s fourth release in his own name for STUNT Records, and among the follow-ups to 2008’s stunning debut, DADAIÔ – a record responsible for introducing many listeners to his genius, and an album in collaboration with legendary Brazilian percussionist Robertinho Silva. Politiken Newspaper gave the album the coveted six-out-of-six hearts rating, and listed it among the year’s top ten albums as an “unusually engaging dream of a record… joyous and enchanting with a contagious joy of life.” TEMPOS BONS followed in 2012 “with sensual and poetic landscapes, where melody and rhythm and youthful creativity celebrate triumphs with the joy of life and sensuality.” 2015’s BROKEN BOSSA featured Diego shining in various formats, including solo, duo, and trio constellations, his talents and his relaxed enjoyment of music performed with equals – each band member casual and laid-back, but wildly virtuosic.

Diego Figueiredo also has humbler sides where the virtuosity is used in the service of others. Thus, his abilities as an accompanist are very much admired – especially by vocalists, where he plays for musical totality, and as on COME CLOSER, “duality.” Unpretentious and playful, Diego and three singers interpret a vastly diverse program at an extremely high level and in ever-changing tempi and themes. He has toured intensively around most of the world with Cyrille Aimée, Janni Siegel, and Chiara Izzi. And it is precisely these three vocalists who, in each their own warm and familiar ways, greet him again through a repertoire of welcoming earworms of songs – from Jobim to My Fair Lady, jazz standards, a single Diego composition, and some surprising choices like Miles Davis‘ “Nardis” with Portuguese text. The singers contribute to a relaxed and beautifully unacrobatic album characterized by a splendid expressiveness over Diego’s subdued, virtuosic, warm guitar tone and the pearls he strings together as a soloist.

Diego has been collaborating with Cyrille for a number of years, having worked together on BROKEN BOSSA, and she is the kind of singer one falls in love with. Born and raised in France, she was based in Brooklyn for a few years, but has now moved to New Orleans. She has become a sought-after artist, and on COME CLOSER thrills with her agile vocal skills and playful expressive jazz style on four inspired covers. It is impossible to resist the consumption and enjoyment of her work.

Janis Siegel is well known as the charming and most extroverted of the girls in Manhattan Transfer and was involved with the group’s debut in 1969 when they burst onto the scene with their jazzy polyphonic vocal sound. Siegel’s distinctive voice is capable of absolutely anything, but enchants listeners with her energy, imagination, and choice of songs – a celebration filled with joy, shining with the compelling luster of experience. Her storytelling has a heartfelt and wondrous depth when she sings with her age and not against it.

COME CLOSER concludes with three tracks featuring Chiara Izzi. She is perhaps the most under-the-radar of Diego’s three “ladies,” but with a talent that demands to be heard and deserves to be admired. Her musical journey began in Italy on the piano, and thanks to an active life and career in Europe, she has achieved a versatile professionalism that has enabled her to master the jazz tradition and develop a deeply personal, unique sound and distinguished voice. Chiara’s international debut took place at the Montreux Jazz Festival Vocal Competition in 2011, where she was awarded first prize by Quincy Jones. When she’s not touring internationally she can be heard in New York (where she now resides), where she performs regularly at prominent jazz clubs and venues with some of the city’s finest musicians… including Diego! 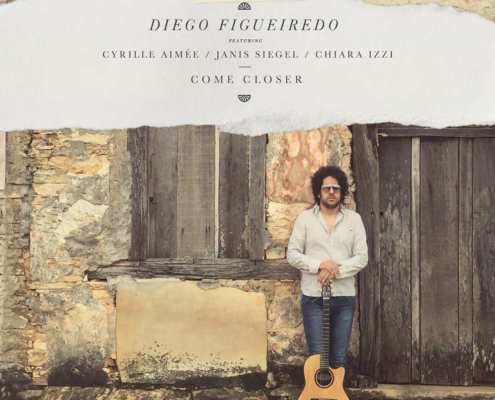