The sound of popular music in the third decade of the 21st century is predominantly electronic. Few singers consider going on stage without an Antares Auto-Tune and they often perform to pre-recorded accompaniment made by MIDI sequencers and a Roland TR-909 drum machine. Turn the clock back just sixty or seventy years and today’s young audiences would be amazed to discover that a middle-aged lady could walk out onto the stages of the biggest concert halls in the world and enthrall audiences by singing through the house PA accompanied in real time by a grand piano, a double bass and a drum kit. Nothing else. No spectacular dance routines, no light show, strobes or dry ice. Just one woman standing alone under a single spotlight with a microphone.

But what of the music? The musically curious would be drawn to constantly shifting harmonies, leading the melody in unexpected directions; they would be fascinated by the lyrics, where each song had a story to tell. They would have questions, too: How did the singer remember so many songs? How did she manage to stay in tune without pitch correction? What was it in her performances that made her audiences want more? And how come, at the mere mention of the name ‘Ella’ the biggest concert halls in the world could be sold out within hours?

“The Lost Berlin Tapes”, a stunning find discovered in Norman Granz’s tape collection, provides some answers to those questions, but not all. For a start, Ella Fitzgerald was a phenomenon. You only have to look at Frank Sinatra’s face when she takes the microphone during his TV specials back in the 1960s. It’s one of undisguised admiration and how-does-she-do-it wonder. Audiences felt the same way, no matter if it was Carnegie Hall in New York City, the Albert Hall in London, L’Olympia in Paris, the Sydney Opera House in Australia or the Teatro dell’Opera in Rome. Ella’s talent was sublime — but there was also something more. It was the sound of her voice — unthreatening, warm and joyful, with every song a celebration of the art of jazz singing and of life.

For evidence of that, listen to “Jersey Bounce” from this remarkable concert in Berlin’s Sportpalast on March 25th, 1962. It’s an over-the-shoulder salute to the pre-World War II Swing Era, where Ella’s roots are firmly planted. The scat section is a compendium of big band riffs effortlessly recalled with humor and affection. Then go to “Angel Eyes,” one the most haunting ballads of the Great American Songbook, penned by Matt Dennis, who also had roots in the Swing Era as an arranger for Tommy Dorsey. It’s quite possibly Ella’s finest ballad performance — and that’s saying something.  But look a little closer. She’s gone from having the audience happily swinging along with her, tapping their feet and popping their fingers on “Jersey Bounce,” to the next number “Angel Eyes” where she’s moved them to tears. That’s special.

Ella’s 1962 tour of Europe was the most extensive to that point in her career. It was as a part of Norman Granz’s Jazz at the Philharmonic, which she had been headlining since her first JATP performance back in 1949. Granz was an animator par excellence, touring JATP with a selection of America’s top jazz musicians around the world, an inspired record producer for his own Clef, Norgran and Verve labels, and he was Ella’s manager. Over the years, he slimmed the line-ups down to feature just two or three major artists under the JATP rubric and, on this tour, he had a group co-led by trumpeter Roy Eldridge (a Granz favorite) and sax legend Coleman Hawkins open the concerts. The second half would begin with Ella’s rhythm section, recently contracted, with Paul Smith on piano, Wilfred Middlebrooks on bass and Stan Levey on drums. Then Ella would join them to hold the stage for the next hour or so.

Smith was Ella’s favorite pianist. She happily defers to him during the Berlin concert as ‘our leader,’ but he was also very in-demand, with a staff job at NBC and some 300 record dates a year. Norman Granz, who greatly respected Smith, persuaded him to leave his comfortable existence in Santa Barbara, where he enjoyed tennis or golf most mornings, to be Ella’s accompanist. Both Smith and Granz were ex-marines, both were tall and literally saw eye to eye. Granz wanted a steady hand on the tiller — Smith had previously toured Europe with Ella in 1960 where they recorded Ella’s Grammy-winning Mack the Knife: Ella in Berlin — for what would be one of Ella’s busiest years yet – it included performing to fifteen thousand people at Madison Square Garden for John F. Kennedy’s ‘Birthday Salute’ on May 19, 1962 and playing the 7th Annual Grammy Awards in Las Vegas to a huge TV audience.

The 1962 Jazz at the Philharmonic tour of Europe opened on a wet winter’s night at London’s Royal Festival Hall on February 17th. “As usual, it was a triumph of vocal artistry,” said Melody Maker’s Max Jones. “A new spirit is abroad in Ella and she carried on with more humor and exuberance than we expect from Lady Fitz…in all she and the Paul Smith Trio appeared to be having a ball.” (Max Jones, “Great Jazz at the Phil”). The following night they played London’s Hammersmith, touring north as far as Glasgow (February 26) and back down south again, taking in several large cities such as Leicester (February 28). Never commented on before was that Ella played the London area six times on the same tour! — in addition to the two already played, Finsbury Park (March 3th), Lewisham (March 4th), Southend (March 5th) and Kilburn (March 9th) — and still people were turned away at the box office. It was on one of these London stages, recalled drummer Stan Levey: “We’re playing away, swinging and, all of a sudden from the wing, this guy staggers out. He’s got a long beard, he’s disheveled and Ella looks at me, ‘Do something!’ I pick the guy up and walk him off stage. I get back on the drums and we’re playing again and all of a sudden here he comes again. Ella does a double take, says, ‘Ladies and Gentlemen, Montgomery Clift! [a handsome movie star of the day].’ The audience applauds and boo me when I walk him off — it was very funny!” (Frank R. Hayde, “Stan Levey: Jazz Heavyweight”)

When the tour moved to mainland Europe, the Olympia in Paris first, it really began in earnest, as Paul Smith recalls in an interview from January of 1992, “Double concerts in Europe in different cities, one concert 6 to 9, and then get a plane and fly down to start another concert 400 miles away at midnight!” One such concert was at the Concertgebouw in Amsterdam on March 31st, a country where Ella was truly revered as a jazz icon. Germany, where the unrelenting schedule took her next, loved her, too. “We could never understand how she did it for years before we came in, and for years afterwards, it didn’t have to be that hard, but she loved it”, said Smith.

The Lost Berlin Tapes is a result of Granz’s habit of recording Ella live and then, driven by his next project, forgetting all about it. What is striking is the sheer range of tunes she sang that night, including, “I Won’t Dance,” “Jersey Bounce,” “Clap Hands, Here Comes Charlie!” (associated with her boss back in the 1930s, drummer Chick Webb), “C’est Magnifique,” “My Kind of Boy” and “Mr. Paganini.” These are hardly out of the top drawer of the American Songbook, but when they’re ‘Ella-fied’ they seem to assume a stature they had never known before, “The average singer would have a helluva time making those songs sound good,” observed Paul Smith, “I would advise any singer to listen and see how easy she sang, she didn’t make a lot of work out of it. She sang easily, she loved what she was doing.” That becomes even clearer when she delves into the Billie Holiday songbook for her version of “Good Morning Heartache,” tips her hat to the Ray Charles hit ‘Hallelujah, I Love Him So’ — the audience loved it, and she reprises it — or revisiting her Grammy-winning hit, “Mack the Knife.”

Listening to these tapes, unheard since 1962, there’s no doubt about it. Ella did indeed love what she was doing and the audience loved it, too — a kind of two way synergy where the audience lifted her and she lifted the audience.  She was in her prime during this concert, fast approaching her 45th birthday with a lifetime of experience to draw upon. Her musicians and those that knew her well say she came alive when she performed – it was her life and reason for living. It’s what took her off the streets of Harlem and, ultimately, to Beverly Hills — something she never forgot. And she treated her musicians very well. Looking back on his two years with Ella, Stan Levey said, “With Ella, it was first class all the way. You got paid 52 weeks a year, but you work, what — thirty, thirty-five? What can I say about her singing? She’s like an instrument. Like Charlie Parker without a horn. Incredible sound, incredible interpretation of a lyric, incredible phrasing. And a really, really nice girl.” (Frank R. Hayde, “Stan Levey: Jazz Heavyweight) 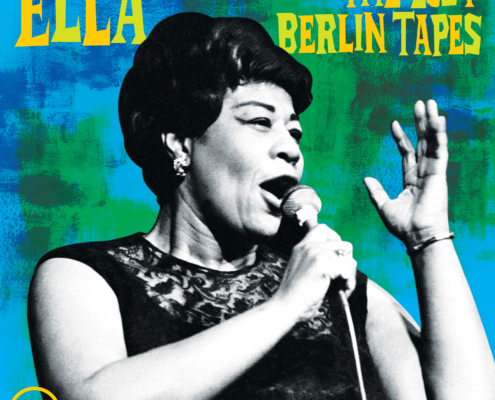