The sheet music that was present at previous Ibrahim Electric recording sessions was conspicuously absent when the three band members met at The Village Recording Studio to record their new album, TIME MACHINE. But this was no error on anyone’s part. It was, in fact, by design:

“Usually we practice a lot for recordings. Here, we wanted to try something new. The idea was that we shouldn’t spend a lot of time practicing, but simply meet up and jam,” says the band’s guitarist, Niclas Knudsen. It’s a luxury afforded through the familiarity developed over almost two decades of intense musical activity together. For this album, the preparations they made were few and far between, nearly non-existent.

“The premise was different this time around,” organist Jeppe Tuxen explains. “For some songs, a single theme or sketch was created, but other times we were just playing – without a theme, without anything. We can do it because we know each other so well. And it worked for this recording.”

Drummer Stefan Pasborg continues: “We know how to influence each other. When Jeppe plays something specific, I know where he wants to go and I can respond to it. Niclas knows my playing in the same way. We just have to press each other’s buttons and suddenly everyone is included. It’s great… I don’t have that in other bands. It’s like a musical marriage.”

The record’s ten tracks were created and recorded during two sessions in Thomas Vang’s studio in Vanløse based on musical ideas, thematic bits, and the afore-mentioned sketches contributed by each member and completed collectively. Ibrahim Electric is a high-functioning powerful musical unit whose trademark captivating energy and infectious grooves are even greater than the sum of its parts.

Knudsen (born in 1972), Tuxen (born in 1979), and Pasborg (born in 1974) were first assembled in this particular constellation in 2002 when Pasborg recruited the others to play at his final graduation concert at the Rhythmic Music Conservatory in Copenhagen.

“It touched us all, it hit us hard. Things fell into place. We discovered the energy we’ve played with ever since,” says Jeppe Tuxen of their introductory performance.

The seeds were planted, and the new band was finally given a name a year later. The driving force behind Ibrahim Electric is a synergy forged by a mutual joy of playing together – crafting a sound that should be heard and played loud.

The sound they create together is a sonic crucible, a musical stew. The band members’ common musical references are numerous. With TIME MACHINE, the group moves through time between musical heroes, navigating through sources of inspiration and the mutual love of the organ funk masters from the 1960’s: Jimmy McGriff, Jack McDuff, Jimmy Smith, and drummer Idris Muhammad.

If you explore their previous releases, one can also hear other clear influences, including The Doors, Fela Kuti, Jimi Hendrix, as well as a plethora of genres including Surf, Punk, Jazz, Soul, Cuban, and Indian music.

The song Highlander 74 on the group’s new album, which is their first studio album in 6 years, tips its hat to the film music of Italian master Enrico Morricone, while Cowboyman is a rock’n’roll-surf-ish offering. In both pieces, one can trace the humor and self-irony that is also part of the group’s approach. Their shared mission is taken seriously, but not so much as to lose sight of the fact that it’s an album celebrating their own origins, and all vehicles that are self-celebratory are also inherently (and delightfully) compromised.

It doesn’t matter to Ibrahim Electric that perhaps not all listeners may necessarily notice that along this voyage, they diverge from the so-called ‘beaten’ path with polyrhythms and scales from exotic countries. That is neither their goal, nor what defines their grip on the music and audiences. Rather, it’s the energy and the intertwined musicality that makes each member irreplaceable. It’s a collective in the truest sense, in which there can be no substitutes. Hand the drumsticks to someone other than Stefan Pasborg, allow anyone besides Jeppe Tuxen’s hands and feet to dance along the B-3’s keys and pedals, or invite a guitarist not named Niclas Knudsen to plug in to the amp, and it will never sound like Ibrahim Electric. 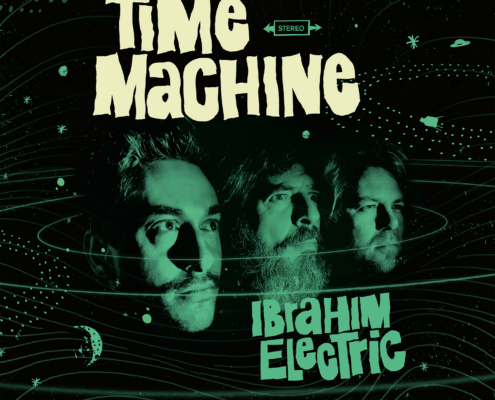