All tracks written by Immanuel Wilkins

The music of saxophonist and composer Immanuel Wilkins is filled with empathy and conviction, bonding arcs of melody and lamentation to pluming gestures of space and breath. Listeners were introduced to this riveting sound with his acclaimed debut album Omega, which was named the #1 Jazz Album of 2020 by The New York Times. The album also introduced his remarkable quartet with Micah Thomas on piano, Daryl Johns on bass, and Kweku Sumbry on drums, a tight-knit unit that Wilkins features once again on his stunning sophomore album The 7th Hand.

The 7th Hand explores relationships between presence and nothingness across an hour-long suite comprised of seven movements. “I wanted to write a preparatory piece for my quartet to become vessels by the end of the piece, fully,” says the Brooklyn-based, Philadelphia-raised artist who Pitchfork said “composes ocean-deep jazz epics.”

Conceptually, the record evolves what Wilkins begins exploring on Omega, which included a four-part suite within the album. On The 7th Hand, all his compositions represent movements, played in succession. “They deal with cells and source material like a suite would,” says Wilkins, “but they function as songs, as well.”

While writing, Wilkins began viewing each movement as a gesture bringing his quartet closer to complete vesselhood, where the music would be entirely improvised, channeled collectively. “It’s the idea of being a conduit for the music as a higher power that actually influences what we’re playing,” he says. The 7th Hand derives its title from a question steeped in Biblical symbolism: If the number 6 represents the extent of human possibility, Wilkins wondered what it would mean — how it would sound — to invoke divine intervention and allow that seventh element to possess his quartet.

Wilkins often draws inspiration from critical thought. Even the striking album artwork challenges convention: “I wanted to remix the Southern Black baptism, and also provide critique on what is considered sanctified and who can be baptized.”

On “Emanation,” Wilkins’ hallmark conviction arrives in the first phrase. Imaginative and buoyant, he navigates layered interactivity before passing lead energy to a receptive Thomas. The movement finishes seemingly in the middle of a vamp — a reflection of Wilkins’ treatment of time. “In music, time is questionable,” he says. “It can challenge the notion of what time is and how you feel time.”

Wilkins sought to create an upside-down triangle of metric modulation through the recording. “Each piece is related to the next rhythmically by a triplet meter,” he says, “so it goes down by a triplet until the fourth movement, then it goes up by a triplet to the fifth movement, then to the sixth, and the seventh is free.” He crafted this concept in part for the feeling of seamless motion.

“Don’t Break” honors Wilkins’ friendship with Sumbry, and the influence they have on each other’s expressions. Featuring the Farafina Kan Percussion Ensemble, with which Sumbry regularly performs, the composition provides cyclical elasticity and an explicit representation of Wilkins’ concept. “When I think about vesselhood, I think of African practices of spirit possession,” he says. “You see that in most of the African Diasporic spiritual practices; Yoruba, it’s on the drums to call down a deity, and then the dancer gets possessed by that deity. But it’s kind of universal, across all African practices — including in the Black Church where you catch the Holy Spirit — and it’s directly linked with the spiritual power that the drum carries and how it’s able to channel that power.”

Wilkins composed “Fugitive Ritual, Selah” as a hymn to Black spaces. He drew inspiration from the energy of places where Black people gather in celebration, praise and refuge, away from a pervading culture of surveillance. “Selah means pause — one definition is to give space for the Holy Spirit,” he says. “I was fascinated with the idea that generally there are no white people in Black churches. If you go to a Black church, there’s no white people there [laughs]. It’s not like they’re not welcome. But somehow, the Black church has proven to be a space where magical things can transpire, within the space, on a quantum level.” Johns’ tender treatment of an introductory melody channels that feeling. “Daryl takes really beautiful solos,” says Wilkins. “I’m always pretty intentional about giving him space to do that and tailor-make a moment for him.”

The middle point of the seven movements, “Shadow” serves as the lowest-metered piece. Wilkins offered his bandmates Wayne Shorter’s composition “Fall” from the Miles Davis album Nefertiti as a musical reference, modeling “Shadow” after its essence. “I wanted them to be almost minimalist in their approach,” he says. “I wanted it to be pretty stripped down to basic swing, basic walking, to allow me and Micah to be a little creative but still have the melody going at the same time. It’s really about the melody, but it lends itself to creativity.”

The introduction of lyrical and textural dimension from flutist Elena Pinderhughes proves intentional, as well. Appearing on “Lighthouse” and “Witness,” whose melody features blossoming half-notes, Pinderhughes serves as an element of activation. Combined with Thomas’ mellotron, her flute acts as a vehicle to invoke divine intervention: “I thought of subtly introducing two new voices that emanate from the source of the band. There’s this Bible verse: “When two or three are gathered here in my name, there am I in the midst.”

Perhaps the most compelling movement develops over the course of 26 minutes. When they’d perform “Lift” live, the quartet never quite knew how the music would manifest. Sometimes the gesture would conclude after 10 minutes, sometimes 45. “We had no idea of how long it would be,” says Wilkins, “but in the studio we were like, ‘Let’s just go until it’s right to stop.’” The Pentecostal character of “Lift” tasks the listener with practicing radical empathy, according to Wilkins; the ritual of speaking in tongues emanates across arcs and cycles. “To an outsider, it’s gibberish or meaningless,” says Wilkins. “But those tongues send codes to the Creator.  To the slave owner, Aunt Hester’s screams were just screams. But to the other slaves, those screams carried messages to flee, to sing, to run, to keep working — a host of things. So, I was fascinated with that, too — stream of consciousness or speaking in tongues carrying messages that listeners may not understand.”

Whether The 7th Hand reaches full vesselhood matters less than the attempt itself. Wilkins and his bandmates reveal their collective truth by peeling themselves back, layer by layer, movement by movement. “Each movement chips away at the band until the last movement — just one written note,” says Wilkins. “The goal of what we’re all trying to get to is nothingness, where the music can flow freely through us.” 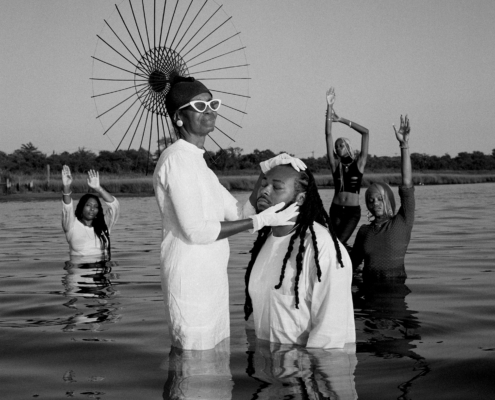