“When you play music together, the most important thing is that you want the best for each other. I love playing with the wonderful musicians in our band and feel very privileged to do so.”

Saxophonist Jan Harbeck’s enthusiasm and faith in the quartet he’s led since 2007 is stronger than ever – and with good reason. They’re still developing and pushing the music forward together, as evidenced by their newest album, BALANCED, arriving in late 2022.

The Jan Harbeck Quartet has been packing venues around Denmark and Europe for years now and already has several critically acclaimed (and commercially successful!) albums in its catalog, including IN THE STILL OF THE NIGHT (2008), COPENHAGEN NOCTURNE (2011), and 2014’s VARIATIONS IN BLUE (2014), the last of which also features American saxophonist and collaborator Walter Smith III. Harbeck has often cultivated works from the great American songbook, but on his most recent album (2019’s THE SOUND THE RHYTHM) he began to put more focus on his own compositions – including the opening track Lighter Shades which quickly found a home on several Spotify playlists and rocketed to more than 6 million streams on the platform.

This new album consists exclusively of compositions by the saxophonist, bandleader, and ever-developing composer. As he puts it: “We have a special sound together and when we play a song that no one has heard anywhere else, it has a unique chance to develop. It’s not supposed to sound quite like anything else and you should be able to hear that it’s us playing.”

For the recording, the musicians all set up in the same room – specifically, a space in a church that was chosen by Harbeck for its natural sound and intimacy. The concept was nothing new for Harbeck and his band, who also prefer to play acoustically at their live concerts: “… it just sounds better and more magical when the overtones of the instruments blend naturally in the room.”

Jan Harbeck believes he played more youthfully years ago – with a certain fire and attitude. At that time, he was busy playing a lot of big band gigs – a setting where tenor players are expected to stand up and blast off on cue. After a break from that world, his trademark sound these days is something understandably calmer, laid back, and yes, balanced. He plays with superb technical ability and musical depth inspired by both Ben Webster and Dexter Gordon, but it’s probably Ellington-band saxophonist Paul Gonsalves‘ tidal-like waves of playing which influenced him more than anyone else.

The title track on this new album is a laid-back, slightly bluesy vehicle and a form of tribute to the specific instrument Harbeck plays on today – a Selmer Balanced Action from 1939 (in itself a treasured relic of another era), but this particular horn was also previously owned and played by the great Stan Getz, adding to its magic and legacy.

The saxophonist’s regular bandmates include pianist Henrik Gunde (piano), Eske Nørrelykke (bass), and Anders Holm (drums), and on BALANCED the quartet becomes a quintet on several selections with the addition of Cuban percussionist Eliel Lazo. One might assume that his playing would push the program into Latin-jazz territory, but his expert and tasteful touch on the congas adds a soft, warm presence to the band’s sound that is conducive to the music’s pulse and contributes to the album’s already chilled-out atmosphere.

That atmosphere, built on engaging, melancholic ballads, first manifests itself on One Fine Day, a romantic tune featuring some expert storytelling on the part of the saxophonist. Silver String Valley stands out, leaning into more of a soul vibe than the other songs here, and Henrik Gunde shines on it, both as a brilliant soloist and master accompanist. As Jan Harbeck says: “…with Gunde, you play better than you can.”

The band takes the tempo down and the saxophone slides in stealthily on the tango-inspired Tranquility, and Woodwind is another wonderful example of the group’s pace-and-space approach to presentation – respectfully echoing Ellington and Strayhorn. The band transports listeners into an old nightclub with the loungy One Step at a Time, where you can almost see the saxophone making waves through the smoke in the room. The few truly swinging tracks include The Enchanter and The Drive, the latter gently pushed along by a hushed, almost whispering saxophone, and (at this point) predictably delightful piano playing. The album’s final track is fittingly entitled To Be Continued and is an intimate, bittersweet ballad, whose name reassures us all that we can look forward to many future adventures with Jan Harbeck and his quartet.

As the saxophonist puts it: “Music is fantastic – it bypasses our intellect, and you don’t have to explain a lot. The expression is strong enough in itself.” 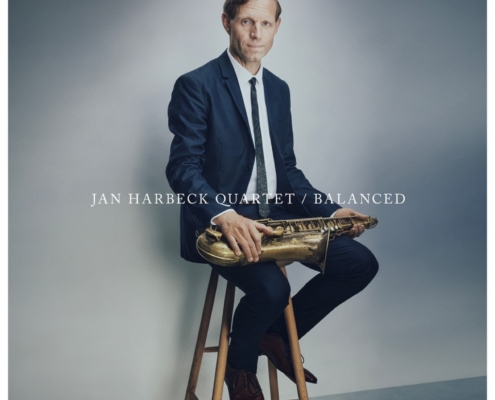 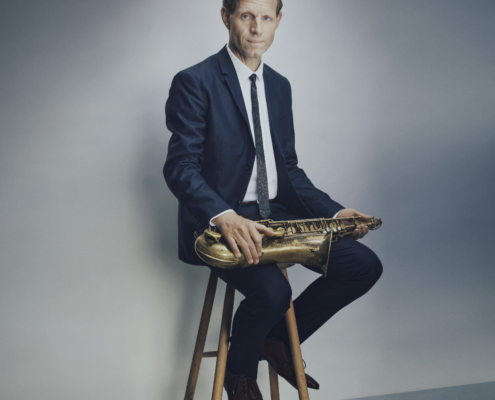 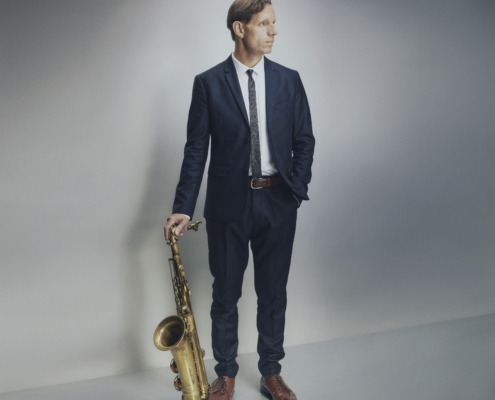 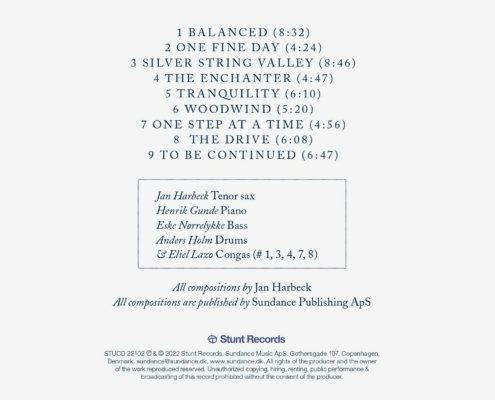