Slated for release July 17, Love Letter includes Heath’s elegant arrangements of three less traveled originals culled from his enormous corpus. He distinctively interprets “Con Alma,” an essential jazz standard by Dizzy Gillespie, his lodestar from the moment they met in 1946. Joining him and Kenny Barron in erudite, tender dialogue on trumpeter Kenny Dorham’s “La Mesha” is Marsalis, who has presented Heath on numerous occasions at Jazz at Lincoln Center since 1992. On this unjustly obscure Dorham gem and the Arthur Herzog-Billie Holiday collaboration, “Don’t Explain” — indeed, on every track on Love Letter — Heath’s soulful, trenchant, urbane solo flights evoke his poetic spirit with old master concision and the authoritative chops of a musician half his age.

A highlight in a program of highlights is Cécile McLorin Salvant’s poignant tour de force portrayal of unrequited love that is at the core of Billie Holiday’s lyric on the blue ballad “Left Alone,” composed by Mal Waldron. Another is Gregory Porter’s world-weary yet gentle reading of Gordon Parks’ underground classic “Don’t Misunderstand” (introduced by O.C. Smith in the blaxploitation classic Shaft’s Big Score).

“Jimmy always wanted to know the lyrics of a song before playing it,” says Carol Friedman, who co-produced Love Letter with Grammy-winning producer Brian Bacchus. “That particular sensitivity no doubt contributes to the intimacy of his sound and is the reason he loved playing ballads — whether a tune had lyrics or not, he was singing with that horn. This is the record Jimmy never got to make. Asking him if he wanted to do an all-ballads album was predicated on decades of us talking about singers and love songs.”

Heath once told jazz writer Bill Milkowski, “You can’t ask for anything better than to be respected by your peers,” and the deep respect and esteem that Heath’s partners felt for the leader is palpable throughout the proceedings. “The feeling in the studio was great, with so much love for Jimmy,” says Malone, who flew overnight from India to New York and went straight to the recording studio to make it to the session. “We were there to play for him, to make things beautiful, and he made sure that every note was in place.”

Heath earned that love as much through the quality of his character as the force of his musicianship. As Downbeat magazine noted in its obituary, he “excelled as a communicator, conveying information he’d accrued as a performer, composer and public figure. He did this both formally — helping found the master’s degree in jazz studies program at Queens College — and informally, in off-the-cuff conversations with dozens of acolytes he mentored.”

One such beneficiary was alto saxophonist Antonio Hart, the current director of the jazz studies program at Queens College, who told Downbeat that Heath “always talked about the need to balance science and the spirit.” Co-producer Bacchus elaborates on how thoroughly Heath embodied that dictum when organizing the music for Love Letter.

“I was continually in awe of this 92-year-old man who was sitting at the computer, writing arrangements, and sending me things that I could put into MIDI and Garage Band so I could hear them,” Bacchus says. “It was humbling to see someone that age operate at that level. And in his playing, Jimmy — who people think of as a bebop-rooted player who could nimbly negotiate all the chord changes you could throw at him — was getting rid of all the extraneous notes and getting to the core of what needed to be said.”

Born in Philadelphia, Pennsylvania, on October 26, 1926, Heath was the younger brother of bass giant Percy Heath (1923-2005) and the older brother of drummer Albert “Tootie” Heath, with whom he partnered in the co-led Heath Brothers, documented on ten recordings after 1975. He received an alto saxophone at 14, and after high school toured with a Midwest territory orchestra until 1946, before returning to Philadelphia, where, in 1947, he organized a 17-piece bebop band that included future stars John Coltrane and Benny Golson.

After a 1948 stint with bebop trumpet pioneer Howard McGhee, Heath joined Dizzy Gillespie from 1949 to 1951. He transitioned from alto to tenor saxophone during several years in a Miles Davis-led combo — alongside his brother Percy, and bop avatars trombonist J.J. Johnson and drummer Kenny Clarke — that recorded Heath’s bop classic “C.T.A.” in 1953. That year, he also performed on a J.J. Johnson session that marked trumpeter Clifford Brown’s first recording. Heath seemed poised to claim his place as a major voice of the saxophone, but his career was derailed in 1955, when he was arrested and convicted on narcotics charges.

During his four-and-a-half-year incarceration, Heath led and wrote for the prison big band. The day after his release in 1959, he met Mona Brown and began their sixty-year marriage and love affair. Parole restrictions prevented him from traveling outside Philadelphia, forestalling an opportunity to replace Coltrane in Davis’ group. At the instigation of Cannonball Adderley and Philly Joe Jones, he signed with Riverside Records, for which he functioned as a de facto staff arranger and led six vivid albums that debuted now-classic tunes like “Gemini” and “Gingerbread Boy.”

Heath returned to New York in 1964, the year Riverside folded. Eight years passed before his next leader recording, The Gap Sealer, a populist “variety package” on which he expanded his tonal palette, incorporating soprano saxophone and flute, electric keyboards, traditional African melodies and funk beats. During that interim, he’d taken steps to move beyond the “mother wit and intuition” upon which he’d previously relied, studying orchestration, string and vocal writing, and extended-form composition.

He further cohered these interests through his activities with the Heath Brothers and at Queens College, where he wrote new material for his arrangement and composition students. In the process, Heath created repertoire that he presented on several essential big band albums, beginning with Little Man Big Band for Verve in 1992.

Two of Heath’s three originals on Love Letter gestate in orchestral charts — “Fashion or Passion” comes from a 2004 Jazz at Lincoln Center Orchestra commission, while “Inside Your Heart” — Heath’s only soprano saxophone vehicle on the date —  is the second movement of The Endless Search, a suite Heath recorded in 2010 with the Seattle Repertory Jazz Orchestra.

It sounds as though Billy Strayhorn was on Heath’s mind when he wrote “Ballad For Upper Neighbors Suite,” the third original, which he’d previously addressed on a 1995 recording. In the liner notes, the distinguished author Gary Giddins discusses the arc of Heath’s playing in his lifetime and specific to this song: “There was little drama in the way he played, only in what he played, his deep, dark sound, as demonstrated here, belying his five-foot-three frame not to mention his age.”

Indeed, a listener unfamiliar with the back story of Love Letter would not imagine that the main instrumental voice throughout the proceedings is a jockey-framed 93-year-old man surely aware of his impending mortality and facing it with pluck and equanimity. He brings the full breadth of his intellectual powers to this final salvo.

“Jimmy was an emotional, romantic player,” Friedman sums up. “He got to make the record of his dreams. How lucky we are to have his last word.”

Written by Mal Waldron with words by Billie Holiday.  Billie never recorded it, but Mal did with Jackie McLean shortly after her death, then Abbey Lincoln recorded the definitive vocal version on her „Straight Ahead“ recording on the Candid label w Mal Waldron, Coleman Hawkins, Booker Little, and Eric Dolphy.  Cecile McLorin Salvant makes it her own and now owns it.

Another ballad by Jimmy, the 2nd part of The Endless Search Suite done by The Seattle Repertory Jazz Orchestra.  The only tune on Love Letter that Jimmy plays soprano saxophone on.

By the great trumpeter Kenny Dorham, who was a good friend of Jimmy’s and a marvelous composer of many standards within the jazz canon like Blue Bossa, Una Mas, Philly Twist and Whistle Stop. This is a ballad by Dorham, named for his middle daughter, that is seldom heard. Jimmy requested Wynton for this track.

Written by the Renaissance man Gordon Parks— Filmmaker, Photographer, Composer.  From his second Shaft film. Originally sung by OC Smith who had a long-standing urban jukebox hit with it, much like Etta Jones‘

Don’t Go To Strangers and Nancy Wilson’s Guess Who I Saw Today.  Gregory Porter has now absolutely redefined the song.

Composed by the great trumpeter Dizzy Gillespie, a friend and mentor of Jimmy’s and an architect of Bebop.  We heard a great orchestral arrangement of Jimmy’s with the Seattle Repertory Jazz Orchestra that was slower than it was usually performed and asked if he would like to arrange it for this project with a smaller group.  He loved Dizzy and loved the idea of including it.  Incidentally, Con Alma means „With Soul“

The third tune on this album composed by Jimmy. Originally commissioned by Wynton Marsalis for the Lincoln Center Jazz Orchestra’s program, Let Freedom Swing. The piece was written to accompany a reciting of Lyndon B Johnson’s landmark civil rights address/speech, „The American Promise“ to Congress before the passage of The Civil Rights Act of 1964.  Submitted for a Pulitzer, it was recognized and singled out by Gunther Schuller for helping to “convince the jury that material of considerable merit is being created in many genres, and (they) discussed ways in which musicians and composers who never before thought of themselves as eligible for a Pulitzer Prize might now be encouraged to enter their works.”

Another song associated with Billie Holiday. (She wrote the lyrics, Arthur Herzog Jr. wrote the music). Pianist Kenny Barron, when asked at the recording session if he had one more ballad he’d like to do, he suggested this song. Jimmy approved, as he loved these lyrics (and only would do songs that he knew the words (inside out) to). 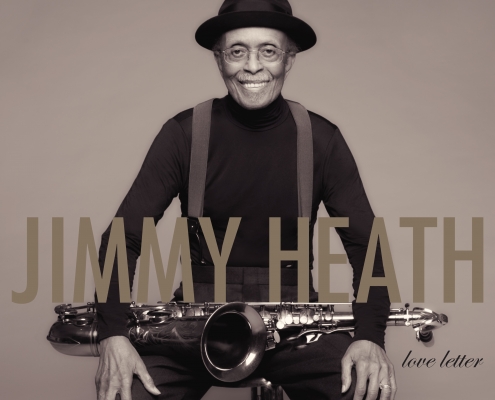