Julia Werup – The Thrill of Loving You

As a singer, she’s self-taught. Her effortless ability to hit the right notes was cultivated far from any practice room, and as her voice and narrative have grown into something special and recognizable it’s important to appreciate her formative experiences throughout what can conservatively be described as an oftentimes complex life.

On ‚The Thrill of Loving You,’ poet and singer Julia Werup (born in 1987) breaks new musical ground on her official debut as a jazz vocalist. Accompanying her are bassist Johnny Åman, pianist Sven-Erik Lundequist, and drummer/producer Thomas Blachman.

Last year, romantic sparks flew during a rendezvous with Blachman, kindling an intense mutual infatuation. Their relationship inspired him to resume creating and producing music after an extended hiatus, a return which included working on ‘The Thrill of Loving You.’

The project is inspired by icons from throughout the rich history of jazz – including trumpeter and singer Chet Baker, singers Billie Holiday, Monica Zetterlund, Abbey Lincoln, and French Jacques Brel, whose lyrics to ‘Ne me quitte pas’ Julia Werup translated into Swedish (‘Lämne inte mig,’ or ‘Don’t Leave Me’ in English) for this occasion.

“I’ve chosen some of my favorite songs and lyrics I can find myself in. The tone is dark, but that wasn’t anything I intended. I probably ended up with these songs because I have a dark side,” she says about the programming choices. Perhaps she was simply ‘Born to Be Blue,’ to borrow a song title from the new album. She’s had her ups-and-downs and occasionally navigated through life with a precarious compass, but has achieved greater tranquility in recent years. That said, she’s more partial to sunsets and jazz music on the stereo than high noon and summer parties in the sun. And active pursuit of the now globally-recognized Danish term (and state) of “hygge” is definitely not on her weekend agenda.

Julia spent her childhood in Sweden. His father was Jacques Werup, the famous author, poet, musician, and a central figure in a diverse and lively cultural environment. She grew up with jazz music and often participated when her father toured and played jazz clubs, but wasn’t particularly fascinated by the artistic life that surrounded her family. She resisted, and her youthful rebellion was extended with an inherent inclination to provoke – at the age of 16, she left home, firmly convinced that she was going down a completely different path than her parents. Over the years, however, it proved not to be the case.

She began performing with a band. Then she started writing poems, and the words penetrated. “I didn’t really have any ambitions, as such. I just needed to get some things out of my system, out of my body… in order to express the pain, sadness, loneliness, and restlessness of a young woman,” Werup shares. Two collections of her poems were released by ‘The Poetical Bureau’s Publishing House’ in Denmark, both in 2017. The first, ‘Ensamma Mäns Död’ (‘Lonely Men’s Death’), was written after her father passed away in 2016. The second, ‘Supernova,’ one critic reviewed as offering “angry and well-lit lyrics that are best consumed as shots when saturated with rosé and ripe strawberries.”

Werup was in her early twenties when she relocated to Copenhagen, the city that would soon become her base. She became an active part of the techno scene, expanding into electronic deep-house music through collaborations with some of the genre’s most distinguished DJs. She’s worked with the rapper Jokeren, and explored her connection to words and music on the poetry and spoken-word scenes in the Danish capital, most recently with the performance group ‘Live On Vinyl.’ Her diverse artistic and professional networks have expanded over the years. She’s performed with pianist (and artistic director of Jazzhus Montmartre) Jan Lundgren, and in ‘Black Dalia,’ music by saxophonist and composer Thomas Hass was paired with her lyrics, sung and recited by herself along with Norwegian Marte Schau.

Thomas Blachman is famous for his unmistakable musical ambition and lack of tolerance for slanted amateurism. In Julia Werup, he hears a naturally gifted jazz singer, and the couple first collaborated on the album ‘Blixtra’ before venturing into the current project. On ‘Blixtra,’ Julia Werup presented poems from ‘Supernova,’ paired with music written by Blachman. It’s an album he’s described as “a fun elegance of brutality and something dark and sexy, yet vulnerable.” Blachman plays drums throughout the session and is joined by some of the best jazz musicians in Denmark, including bassist Lennart Ginman, guitarist Rune Kjeldsen, and saxophonist Hans Ulrik.

‘The Thrill of Loving You’ is Julia Werup’s first release as a jazz singer. The idea came to fruition as she was walking around the couple’s home one day, casually singing ‘Afro Blue.’ The sound begged the question: why keep that wonderful sound to themselves when it deserved to be shared with the world? And so, a band was assembled for the musical outing.

Bassist Johnny Åman was born in Finland, educated in Sweden, and now resides in Malmö. As one of the most in-demand musicians in Scandinavia, he’s recorded with international jazz stars including Jerry Bergonzi, George Garzone, and Dave Liebman, as well as Danish elites such as Anders Mogensen, Lisbeth Diers, and Carl Winther. Pianist Sven-Erik Lundequist also lives in Malmö and is one of Julia Werup’s former musical cohorts, having been described in DownBeat Magazine as “a brilliant, exploratory and sometimes teasing pianist.”

Together with Werup and Blachman, they found common musical ground while exploring songs from the timeless songbook of jazz music. Through experimentation, they play with the material and arrangements and migrate towards a meditative and groovy sound. In line with Thomas Blachman’s musical thesis: there’s no point in creating something that’s only sounds like other things and offers nothing new.

These interpretations live on the artistic merit of Julia Werup, and just like her and her story, the music is special, unique, strong, and recognizable. Original material is presented as well, and on a couple selections they tastefully slow the tempo down – achieving a tactful minimalism through musical eloquence. This is music that emanates from an enlightened Nordic collaboration, equal parts elegant and swinging, satisfying the soul’s longing for both hope and resolution.

Julia Werup – The Thrill of Loving You 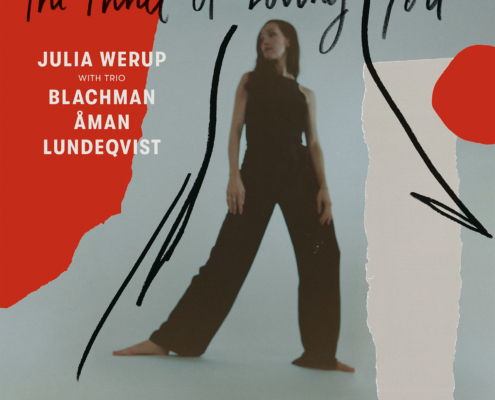