These are the words of the great Kirk Knuffke – a top-shelf creative cornetist based in New York City, and the initiator of an incredible multi-generational meeting-of-the-minds on this incredible new recording. Knuffke doesn’t mince his words and goes on to call Berger the father of the vibraphone in modern music. Karl Berger is nothing short of a genius – a master musician who also shines as a pianist, composer, arranger, conductor, and inspiring teacher with a long and wildly fascinating career that intersects with just about every major player throughout the history of avant-garde jazz.

Berger was born in 1935 in Heidelberg, Germany, and began playing classical piano at the age of 10 before falling headfirst into the jazz universe. In 1954, he began playing with American musicians who were hungry for musical action while stationed in Europe as soldiers. There was a vibraphone at Cave 54, a small club in Heidelberg (and still there today!), and, to paraphrase the living legend, he immediately enjoyed playing an instrument that allowed him to move and even dance a little while playing – especially if and when the piano wasn’t in tune. Admittedly not a student of the vibes, his approach was just different from everyone else’s at the time. Then, he suddenly started winning Downbeat polls: “because I didn’t know how to really play it.”

Things took off from there and Berger became one of the most in-demand European musicians on the continent. He played with a veritable who’s-who of musical royalty (far too many names to list here) and relocated to the US, where his career continued in its upward trajectory. Today, his discography is a seemingly endless list of stunning collaborations.

The musical material on HEART IS A MELODY is a blend of compositions written by some major personalities, players, and friends from throughout Karl’s life, mixed with some of Karl’s own music and some of Kirk’s. Everything is connected to Berger’s fantastic career and incredible story.

Ganesh is a song by trumpeter Don Cherry – Berger’s dearly departed friend, and longtime collaborator. There’s a tune by the great soprano saxophonist Steve Lacy, whom Berger met in 1965 and would go on to play a lot of Monk material with. Around 1970, Karl led a band with Pharoah Sanders, who wrote the beautiful title track for the album. And, of course, there’s also a number associated with Ornette Coleman, the legend with whom Berger would create the “Creative Music Studio” after moving to Woodstock. Cherry, Lacy, Sanders, and Coleman – four jazz pioneers and some of Karl Berger’s real-life soul-mates, who would revolutionize playing freely but “in time,” together. In Europe, the development of avant-garde music was more influenced by classical music and was not so much based on rhythm. “I have always loved to swing,” says Karl Berger; “it is always the first parameter in music. And then, when we got the studio in Woodstock going, Ornette also came up, and we made lots of recordings. A lot of people came: Anthony Braxton, Sam Rivers, Dave Holland, Ed Blackwell, Carlos Ward, Lee Konitz, Oliver Lake, Andrew Cyrille… everyone showed up. And they still do.

There are two of Berger’s originals on the album – Why Not and Going Out – and each offers a bit of insight into Karl’s method: improvisation first, then sitting and refining the idea at the piano to the point that it can be written down. Kirk, an up-and-coming musician from a younger generation, who plays with a mature, developed sense of the music’s history, wrote four new pieces for the recording, Before or Since, Could Hear You, Gentle Giant, and Noble Heart – the last of which is a beautiful, simple song dedicated to the album’s hero – who loves its simplicity. It’s a lesson Kirk learned from Karl: There is no such thing as too simple. In fact, the smaller the better; then you can’t hide behind anything.

In addition to Karl and Kirk, the quartet is filled out by bassist Jay Anderson and drummer Matt Wilson – two musicians who had never played with Karl before now. Kirk loves to introduce musicians and, in this case, he had a clear idea of how the music would sound before the group ever got together. Despite his good feeling going into the recording, the session turned out even better than he had expected. Jay is a consummate professional, appearing on more than 400 recordings, and Wilson played with Dewey Redman for 12 years, creating a legacy connection between band members: Karl’s connection to Ornette, Ornette’s to Dewey, and Dewey’s to Matt. Wilson always brings a fresh, open approach to the music and swings absolutely incredibly. He and Jay have been working together for many years.

Here are four musicians from three generations, with the 87-year-old Karl Berger acting as the central catalyst. He welcomes the listener into the space of possibilities through his playing, compositions, and deep empathy. A true genius. Kirk, Jay, Matt, and Maestro Berger are a gift. 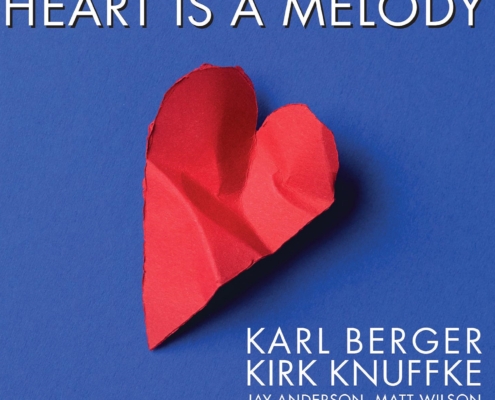 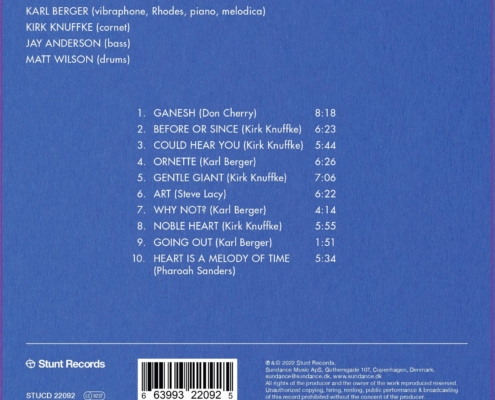 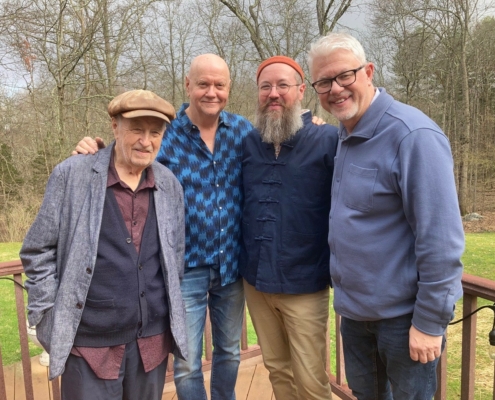