In 2014, the first album from Maria Faust’s SACRUM FACERE (MFSF) was released to the world, uniting critics and casual listeners in their celebration of the new poignant project. The recording won two Danish Music Awards, and has since captivated audiences at concerts across the European continent. Now, in 2020, Faust presents us with the next powerful chapter in the project’s story.

MFSF’s first recording was fueled by inspiration from Estonian folklore and traditional runo-singing, seamlessly weaving together different elements of jazz, folk, classical, and pop music. The compositional language that composer/arranger/bandleader/saxophonist Maria Faust created and employed for the project was minimalistic, melodic, and hymnlike, forged with an emotional accessibility that mesmerized listeners. This unique and recognizable soundcode thrives in the sonic contrast between the gentle Estonian lap-harp (kannel), wind ensemble, and piano, explored in gripping musical vehicles.

MFSF’s new album, entitled ORGAN, focuses on the sound and story of cathedral organs. Originally invented as a communicative medium between humans and God, the instrument has also been called a “God Praising Machine.”

The history of church organs in Estonia is grim: the Soviet regime prohibited religion and subsequently closed down churches in occupied territories. Many once magnificent and holy buildings were converted to storage spaces for corn and oil, some even used as gyms. Fifty years of such treatment was predictably devastating for many of the ancient instruments, but some have since been restored.

St. Nicholas´ Church in Tallinn, where the new recording took place, is an architectural, spiritual, and historical treasure. During the middle ages, it was one of the wealthiest and most beautiful churches in the city. Believed to have been founded midway through the 13th century, it was consecrated to the patron saint of merchants and seafarers, St. Nicholas. Estonia was crippled by the second World War and a bombing on March 9th, 1944 hit the church with a blast that, along with the ensuing fire, destroyed almost everything. Reconstruction of the church began in 1953, and after more than thirty years of restoration, the building was opened in 1984 as a branch of the Art Museum of Estonia, modified to suit the needs of a contemporary museum and concert hall.

Faust has often used “memory analysis” as a tool and source of inspiration in creating her music. In composing the material for the first MFSF album in 2014 (Barefoot Records), she focused on collective memory, including traditions and folklore. On 2018’s IN THE BEGINNING on Stunt Records (a collaboration with Danish vocalist Kira Skov) she studied collective memory and collective trauma. On MARIA FAUST MACHINA in 2019, (Stunt Records) she dove into physical memory through surroundings, including island life and nature.

ORGAN is inspired by the composer’s own personal body memory. It is a celebration of the human body (and life) as a mystical cathedral with soaring ceilings, holy altars, statues, memorials, scripts… and organs, around which everything is centered. Depending on the activity, the room and body can celebrate, dance, sing, mourn, weep, and shake.

On SACRUM FACERE “ORGAN,” Faust pulls listeners into a new, adventurous individual-and-collective reflection – reflecting not only on the journey and growth the composer and band have experienced in the years since their first offering in 2014, but also inviting listeners to dive into their own memory analysis. It is music that both inspires and quenches thirst for new experiences, while respectfully honoring the passion with which we all have lived. 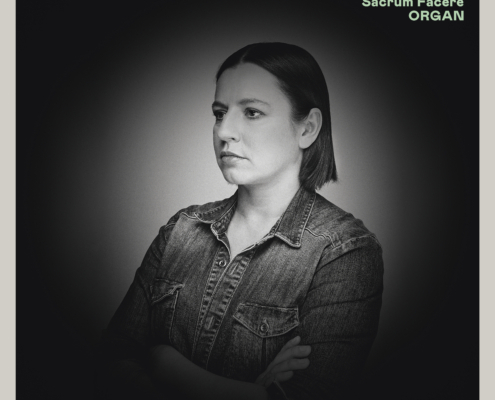