A plan came together in the mind of Marilyn Mazur. It was a plan nurtured by experiences while touring the world, playing in the bands of some of Jazz Music’s great masters, including Gil Evans, Wayne Shorter, and Miles Davis. She would end up leaving Davis‘ project to realize her own. She returned from the USA to her home country of Denmark to create her ‘dream band.’ That’s what she calls it, and that’s what it is.

“I had toured with some big names for three or four years, and it was both fantastic and very educational,” says the now 65-year-old drummer, percussionist, composer, bandleader, and world musician. “But I also had a bit of a hard time with the chemistry in those bands. That music, for me, did not go up to a higher plane, and I wanted to gather a group where the members communicated on a more intimate level, in a more telepathic way. A group that gave everyone space to unfold with their own, individual expression.”

The year was 1989. The result was a new band called Future Song, with a Scandinavian lineup consisting of like-minded and distinctive musicians.

Future Song was a success. The group toured all over Europe, but working conditions were often tumultuous. Members were spread out – geographically (between Denmark, Norway, and Sweden) and with regard to time and energy, as each participant also had other projects to take care of. Marilyn Mazur, for example, said yes when the Norwegian saxophonist Jan Garbarek called her up in 1991 to offer her a place in his band (as Miles Davis had done in 1985).

Different faces and voices fell in and out of the rotation. The economic conditions in the industry made concert organizers reluctant to hire them, and the group was formally dissolved in 2009. But this didn’t mean it was forgotten. In fact, far from it.

A few years ago, in an All About Jazz interview, Marilyn Mazur was asked about her own outings, and she pointed to the music she had written for Future Song. And in January 2015, for her 60th birthday celebration, her greatest wish was to reunite the group with some of the original musicians.

They succeeded, and their meeting was also documented in concert footage from Bodø in Norway and the Copenhagen JazzHouse in Denmark.

The music can now be heard on the CD Marilyn Mazur’s Future Song, Live Reflections. It contains versions of nine Mazur compositions, including two previously unreleased recordings from 1990 and 2008, and it should be mentioned that it is the first of Future Song’s independent releases to present the band live.

Marilyn Mazur was born in New York in 1955 as the daughter of a mother of Polish descent and an African-American father. The family moved to Denmark when Marilyn was six, and it was there that the creative child developed obvious and undeniable talents for writing, singing, dancing, and music.

She had been taught classical piano, but left the keys in favor of percussion. She studied at the Royal Danish Music Conservatory, but she was largely self-taught while carving out a voice as an internationally iconic percussionist and artist. The classical education gave her some theoretical ballast… creating a certain structure while never hindering her in her many creative endeavors. Her willingness to pursue and live out her emotions in a musical universe has been, and remains crucial.

She likes to set up with a large and spectacular range of percussion. According to All About Jazz, she manages to transform her performance into a discharge of energy, and the acclaimed Danish jazz critic Kjeld Frandsen once wrote in a concert review that “here were not least all the details, for example: just that rhythmic figure or just that razor sharp cymbal or bell stroke, which in the right split second could transport the music a few light years. And in the middle of it all – a regular jazz drum set, where Marilyn Mazur could just play jazz drums, as few would be able to, after her.”

Marilyn Mazur is also a collector. In her rehearsal room and private ‘music house’ (or ‘barn,’ as she calls it), she has a myriad of gongs, drums, marimbas, balafons, log drums, cymbals, and bells. Lots of bells. Probably about a thousand.

She formed her own first band in 1973. Many have fallen by the wayside, while new ones are still being added. As a sought-after side-person, she can spout off a list of almost unreal musical partners of dizzyingly length.

Marilyn Mazur has recognition in the form of both international and domestic honorary awards, and she has received a lifetime achievement honor from the Danish state for her overall artistic efforts.

About the new CD, Marilyn Mazur’s Future Song, Live Reflections, she says: “Well, it’s been a long time coming, but it’s nice to get it out. They’re not studio recordings, it’s live music. The mix is ​​made by Norwegian Audun Kleive, who has been in the group from the beginning, and you can hear that there is a drummer in there. He doesn’t go so much for a particularly jazzy sound, he goes for something raw, something wild. It’s the rhythm, the groove and the interplay, which are featured. The different layers stand out clearly, and the soundscape has become a little different than with other Future Songs. But it’s still Future Song. It’s not that different either. The goal was still to create a kind of musical symbiosis where the musicians improvise in a network or, one might say, move around in a maze. It’s not soloist after soloist with accompaniment.”

Marilyn Mazur’s Future Song Live Reflections interprets music from different periods in the group’s existence. The music is broad. It can also be experienced as a piece of history.

It’s in the name ‘Future Song’ that the vision and motion look and move forward and develop naturally. Therefore, the electronics fill up more space on Live Reflections, but it is still music carried by emotion. And in Marilyn Mazur’s vision, musical, non-verbal communication can help to create greater understanding between people. 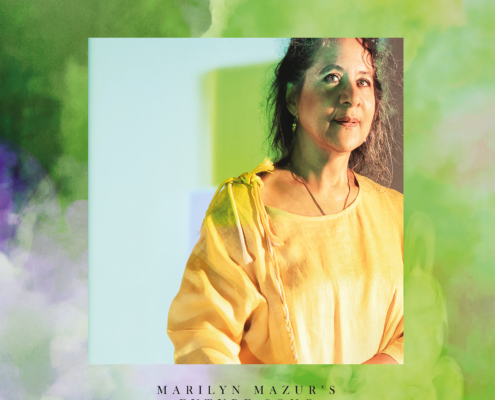