Over the course of his eight previous albums, perhaps what one can learn from the career of pianist, composer, and producer Nduduzo Makhathini is that an artist has achieved a tremendous breakthrough when they can tell a story so layered that its reach is limitless. The story continues with Makhathini’s remarkable ninth album, and his Blue Note Records debut, “Modes Of Communication: Letters From The Underworlds”.

Makhathini grew up in the lush and rugged hillscapes of umGungundlovu in South Africa, a peri-urban landscape in which music and ritual practices were symbiotically linked. The area is significant historically as the site of the Zulu king Dingane kingdom between 1828 and 1840. It’s important to note that the Zulu, in fact the African warrior code, is deeply reliant on music for motivation and healing. This deeply embedded symbiosis is key to understanding Makhathini’s vision as a jazz man.

The role of the church can also not be ignored. Makhathini is said to have hopped from church to church in his younger days, in search of only the music. “I found the sermons to be a bit boring, to say the least,” he said, telling the BBC the story of “There’s Another Church Up The Road,” a track off his 2014 album Mother Tongue.

There has also been a long list of jazz elders Makhathini has imbibed from. “I think ubab’ [Bheki] Mseleku grew up listening to the same kind of music I grew up listening to, having come from KwaZulu-Natal,” he said. “Izangoma and all the different rituals that would have come with their repertoires. He was the most natural influence that I first heard.” He also mentions the likes of Moses Molelekwa who died young “but his contribution was so big,” especially in terms of wrestling against the strictures of genre. “ubab’Abdullah [Ibrahim] also contributes in defining African jazz piano,” said Makhathini. “He has written so much music and we grew up listening to it.”

“I think the earlier musicians put a lot of emotions in the music they played. I think it may also be linked to the political climate of those days. I also feel there is a uniqueness about South African jazz that created an interest all around the world and we are slowly losing that too in our music today. I personally feel that our generation has to be very conscious about retaining these nuances in the music we play today.”

Through his mentor Bheki Mseleku, Makhathini was also introduced to the music of John Coltrane’s classic quartet with McCoy Tyner. “I came to understand my voice as a pianist through John Coltrane’s A Love Supreme,” he says. “As someone who started playing jazz very late, I had always been looking for a kind of playing that could mirror or evoke the way my people danced, sung, and spoke. Tyner provided that and still does in meaningful ways.” Makhathini also cites American jazz pianists including Andrew Hill, Randy Weston, and Don Pullen as significant influences.

As a bandleader Makhathini has marshalled an entire generation of South African musicians into a place where musical communication happens with ever-sharpening intent. He is also a sought-after sideman and has performed with an elder fraternity of South African musicians such as Zim Ngqawana, Feya Faku, Carlo Mombeli, the late singer Busi Mhlongo, Salim Washington, Herbie Tsoaeli and Somi. These apprenticeships have fed into the wide palette that has distinguished Makhathini’s music, proudly informed by geographical idiom while seeking the ideals of improvisation as divination and healing.

Drawing on both the trans-Atlantic slave trade as a diasporic unifier and ubungoma, Makhathini stands at the precipice of new, illuminating myths which are beginning to translate to the public at large. An avid writer and speaker, Makhathini delivered a TEDx talk in 2017 titled “A New Look Towards uBungoma Practices and Articulations.” uBungoma is a Zulu word that refers to the practice of healing and divination.

Active as an educator and researcher, Makhathini is the head of the music department at Fort Hare University in the Eastern Cape. He has performed at renowned festivals including the Cape Town International Jazz Festival and the Essence Festival (in both New Orleans and South Africa), and in 2019 made his debut appearances the Blue Note Jazz Club in New York City, as well as Jazz at Lincoln Center where he was a featured guest with Wynton Marsalis and the Jazz at Lincoln Center Orchestra on their 3-night musical celebration The South African Songbook in Rose Theater. He is a member of Shabaka Hutchings’ band Shabaka and the Ancestors appearing on their 2016 album Wisdom of Elders, and has also collaborated with artists including Logan Richardson, Nasheet Waits, Tarus Mateen, Stefon Harris, Billy Harper, Azar Lawrence, and Ernest Dawkins.

Makhathini’s recording output is prodigious by any measure. In addition to producing albums for his peers (such as Thandiswa Mazwai’s Belede and Tumi Mogorosi’s Project Elo), Makhathini has released eight albums of his own since 2014 when he founded the label Gundu Entertainment in partnership with his wife and vocalist Omagugu Makhathini. Those albums earned him multiple awards and include “Sketches Of Tomorrow” (2014), “Mother Tongue” (2014), “Listening To The Ground” (2015), “Matunda Ya Kwanza” (2015); “Icilongo: The African Peace Suite” (2016), “Inner Dimensions” (2016), and “Reflections” (2016). His 2017 album “Ikhambi” was the first to be released on Universal Music South Africa, and it won Best Jazz Album at the South African Music Awards (SAMA) in 2018. The sprawling double-album found Makhathini bravely seeking to offer an antidote to the linear feel of studio format, marrying message to structure with more fervor and introducing drum ensembles and field recordings to otherwise clean studio productions.

Nduduzo Makhathini professes to be unafraid to step into the realm of liminality, and on “Modes Of Communication: Letters From The Underworlds”, he makes good on his promise to enter the doors of no return with an expansive album in which lyrical, plaintive horns mingle with percussion, pained yelps and urgent lyrics.

In accordance with his beliefs about his home being a fertile ground from which springs his creativity and well-being, several tracks on the album feature members of the Makhathini family, such as on the tone-setting vocal performance by his wife Omagugu on the striking opener “Yehlisan’uMoya” (“Spirit Come Down”), and the mesmerizing backing vocals by Omagugu and their daughter Nailah in “Indawu.”

The horn section on Modes of Communication features American alto saxophonist Logan Richardson, and rising stars of the South African scene including Linda Sikhakhane on tenor saxophone and Ndabo Zulu on trumpet, an adept frontline that translates not only the tension within the music but articulates its premise. The rhythm section is helmed by the ever-intuitive and economical drumming of Ayanda Sikade working in tandem with Zwelakhe-Duma Bell Le Pere on bass. The percussion provided by Gontse Makhene also slides further up the mix to profound effect in the beginning and ending of “Umyalez’oPhuthumayo” (“Urgent Message”).

“In musical terms they say uptempo and upbeat, but sometimes you don’t feel the urgency, even when people say it is upbeat music,” said Makhathini of his approach in Modes of Communication. “So it connects to how do our sonic projections become very deliberate ways of saying things. Very deliberate forms of text besides the fact that we name songs. How do we get to where the song becomes a potion to carry out what it is supposed to? It’s like giving names to your kids, there is a kind of hope that you have that there is something behind that.”

If there was ever a document indicative of Makhathini’s lack of self-indulgence as a piano player and composer, it is in the uncompromising tone of Modes of Communication. “Listening to the Ground connects in many ways to this record,” he said. “So this idea, yokubheka ezethu izinto, of understanding our own rituals and what they mean? The second visit,” as Makhathini called this return to the ancestral realm, “is a more permanent visit, like now I live here. Now I’m with you. Now I understand you.”

Listening to the Ground then was something of an introduction to this idea of listening. “How do we even start listening to an ancestor?” he reflects. “Do we listen with our physical ears? Do we listen in terms of text? Do we listen in terms of color, sonic waves, or umlozi [a whistling spirit that projects the voice of an ancestor]? So my story goes into modes now. How are we listening? Is umsamo [a shrine] enough? Does idlozi [the ancestor] only listen when we sit there siphahle [prepare offerings] or is there a continuous state of overlap between these two realms and are we able to cross to communicate any time?” 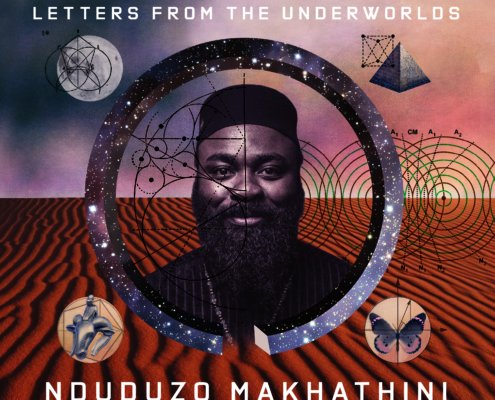