The American tenor saxophonist Scott Hamilton is a timeless treasure, an artistic heir bridging the present day to the great swing saxophonists throughout jazz history. His is a voice reviving and thriving in an iconic style. Today, often times the “new thing” is borrowed or inspired by something older, and here on this record, it’s a treat for lovers of great songs, tastefully played by excellent interpreters.

There is an obvious interdependence between an artist and their material. This has always been the case, and remains true for Scott Hamilton. For him, a good song is fundamental to his craft. He can choose from the many well-known tunes and standards that are always handy, or he can find a similar timeless quality in songs from other periods or places. Scott Hamilton picked up some good songs in Sweden, which can be heard on the STUNT release SWEDISH BALLADS AND MORE from 2013 – an unadulterated tribute to the fusion of traditional Swedish folk music and Swedish jazz. Now, crossing over the Scandinavian waters to Denmark, he has thrust himself into songs taken from the Danish pop culture and beyond: DANISH BALLADS AND MORE.

In this lovely program with the great tenor saxophonist and a trio led by pianist Jan Lundgren, we are reminded of why Hamilton’s consistently high quality has made him famous. He almost surpasses himself with his calm and mature overview, which this time is triggered by Lundgren’s inspired piano playing along with bassist Hans Backenroth and drummer Kristian Leth’s crystal-clear accompaniment. Perhaps there are also a few potential future jazz standards sprinkled among the repertoire here!

“In Love With Copenhagen” contains some of the special (and seasonal) spring sensation easily associated with Copenhagen’s charm. It was written by Bent Fabricius Bjerre in 1968 and the film-melody has lived on ever since. “Dansevise” (Dance Song) is a beloved offering from the same year in a campaign to win the European Melody Grandprix, and was composed by another jazz pianist, Otto Francker. The number caught on immediately and over the years has become a true Danish standard. It took Scott Hamilton to release the melody “Havnen” (The Harbor), a 1937 song with a famous and almost spoken performance by the famed Danish revue artist, Oswald Helmuth. The composer Aage Steentoft claimed that it was his greatest composition – and with this breath-taking interpretation, Scott not only proves how great a ballad interpreter he is, but also that Stentoft was right. “Alley Cat,” also by Bent Fabricius, is from 1962, and hit the top of the charts around the world, offering Peggy Lee another successful hit with her version of this catchy tune. Although “Det Var En Lørdag Aften” (On a Saturday Night) appeared on paper for the first time in 1847, no one knows where this wonderful Danish folk song originated. In 1973, world-famous bassist Niels-Henning Ørsted Pedersen and American pianist Kenny Drew recorded a memorable interpretation. 45 years later, Scott Hamilton has followed in their footsteps! “Take It Easy” seems to be an echo of Fats Waller’s philosophy of life and the main inspiration for Leo Mathiesen from the golden age of the swing era – a musical area Scott knows inside and out. “Montmartre Blues” evokes the late 1950s and 60s when the many of the great jazz expats lived in Copenhagen for various periods of time and used it as a signature in the many radio broadcasts from the famous jazz club. “My Little Anna” is a melody dedicated to NHØP’s daughter and recorded for the first time in 1976, a timeless and wonderful example of the great Dane’s personal output and a natural choice for Scott. The origin of the lyrics for “In the Still of the Woods” have been debated, as some believe that they were written by the eminent fairy tale author Hans Christian Andersen. Perhaps that part is fantasy, but it is widely regarded as fact that the anonymous folk song is one of the most moving, beloved, and truly Danish songs. The bassists Oscar Pettiford and Erik Moseholm share the compositional credits to “Svinninge Blues,” taken from the jazz bass book they wrote together sometime in the 1950s. The title refers to a small village with a jazz club where stars like Dexter Gordon also played and it seems only too fitting that Scott celebrates the place and piece. 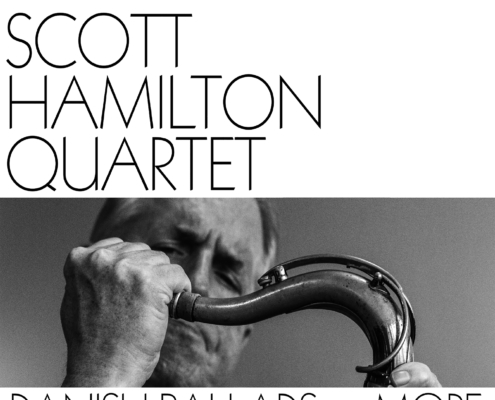