„I’ve lost count of these socially distant days. I long to sing somewhere in the world beyond the
confines of social media and my childhood home. Somewhere face-to-face. Unmasked and
joyous. Pushing breath and story and sound out of myself and into a dark room of strangers. In
that room, we wink and yawn and laugh and remember and applaud and question and gyrate
and rub shoulders and perhaps even sneeze… freely. The memory of those rooms, that house,
the vibration and magic of life itself feels more sacred than ever, more holy. To congregate in
service of storytelling is to choose to believe in something larger than ourselves — something
omniscient and mystical. With so much heartbreak, fear, and uncertainty looming near,
we need to return to the omniscient and mystical parts of ourselves that feels most honest. Let’s
let those parts be the way forward. This album is a simple offering of courage and an attempt
for me to hold on to the thing that makes me feel most alive. I pray that this sonic journey into a
19th century German opera house and the memory of my heart give you one more thing to hold
onto as well – something hopeful, something holy.“ Somi

The release of Holy Room – Live at Alte Oper with Frankfurt Radio Big Band arrives as an homage to the sacredness of cultural space. “Since the pandemic, I’ve been thinking a lot about the intersection of live storytelling, public assembly, and the choice we all have to be an active witness.  What does it mean for an African woman to stand on a European stage and shout the stories in her heart?  What does it mean for a cultural institution to hold space for those stories to be heard and celebrated?” Somi asks.

When Olaf Stötzler, manager of the Frankfurt Radio Big Band (also known as hr-BigBand), invited Somi to perform with them in May 2019 for a national radio broadcast from the historic German opera house Alte Oper, she hadn’t planned on releasing the recording as a live album.  She was focused on the opening of her original musical about the legendary South African singer and activist Miriam Makeba that she’s been developing for the past five years.   The world premiere production was shut down only six days before opening night at The St. Louis Repertory Theater due to COVID-19.

So, during worldwide shelter-in-place orders and while watching her entire tour schedule vanish, Somi revisited the recording of this auspicious occasion, which also marked her first time performing with a big band. “The mere sound of live congregation for the sake of storytelling comforted me in a deeply visceral way.  Not only because it transported me to the stages and repertoire I long to return to, but more so as a meditation on what cultural space actually does for artist and audience in general – and for the marginalized Black, African, female, and immigrant communities that I represent in particular.  The stage and the people immediately become active witnesses of my humanity simply by holding space.  To choose to be a witness of another person’s truth is to choose something I believe to be holy,” she said.

This reflection took on an even deeper meaning to her in the midst of a surging national dialogue on why Black lives matter and systemic racism.  “Every cultural institution has issued blanket statements about why they stand with Black people right now, but do they still choose to be active witnesses beyond the box office and in non-optical ways?  What do their boardrooms and staff look like?”  These are the questions that led Somi to use proceeds from this album as a fundraiser for Black Art Futures Fund (BAFF), a collective of emerging philanthropists promoting the elevation and preservation of Black arts & culture through grant making, board-matching, and organization-to-donor cultivation.  “I want to support an organization that is actively responding to the needs of Black cultural organizations and the artists they serve, especially given how grossly underfunded Black cultural institutions already are.  In the face of a pandemic, that funding gap only gets larger.”  The album will available worldwide on Friday, July 24th, 2020.

With award-winning pianist John Beasley contributing expert big band arrangements and conduction, Somi, the Frankfurt Radio Big Band, and Somi’s longtime collaborators – guitarist Hervé Samb and pianist Toru Dodo – explore her repertoire culled from her previous two Sony Masterworks/Okeh Records albums – The Lagos Music Salon (2014) and Petite Afrique (2017) – both of which earned her ECHO Award nominations as Best International Jazz Vocalist.  The latter album, which makes up most of the live set, won the 2018 NAACP Image Award for Outstanding Jazz Album and tells the story of Harlem’s long-standing African immigrant community.  Like the captivating narratives framed in each song, Somi aims to take concert members on a personal and oftentimes socio-political journey. “It’s important to me that by the end of a concert, the audience understands all of who I am as someone who is hyphenated by default but still whole,” she says. “I’m someone who stands in the ‘in between.’ I try to offer that context musically both in the lyrics and explicitly through the arrangements of each song.  It’s very important to me that there is a balance of my Western and African influences.”

When she speaks of standing in the “in between,” Somi is touching upon her cultural heritage as a first-generation American, growing up mostly in Illinois, of Ugandan and Rwandan parents.  This experience allows her to see the nuanced differences and similarities between African-Americans and various African communities.  That insight, though, has come with some personal struggles that dealt with Somi sometimes being viewed as either “too Western” by some or “not Black enough” by others.  “At the beginning of my career, I often felt pressure to choose one side in order to be understood musically– African or American, Immigrant or Western, Black or Other Black.  Over time I realized that my greatest asset was my ability to be either, both, and all of those things.  So, I simply decided to lean into the tension that often marks the in-between. The greatest gift of art-making has been the opportunity to situate ‘home’ in the cultural imaginary.”

In the Frankfurt concert, that theme of “in between” regarding blackness appears on the riveting “Black Enough”. The song, itself, touches upon misguided societal definitions of blackness. Originally written in 2015 when the Black Lives Matter movement was gaining ground internationally, it addresses the prejudice experienced by black people universally.  Somi closes the song shouting “Don’t shoot!” repeatedly over a brash counterpoint of horns until a bullet-like drum lick ends the song.

“As an artist, I’m very interested in the nuance of the global black experience. Ultimately, I’m just trying to articulate the multiplicities of cultural belonging that are inside of myself and hopefully inside of the music,” she says.

Other songs from Petite Afrique include soul-stirring yet caressing “Kadiatou the Beautiful” that opens the set and tells the story of a forlorn African hair-braider who can’t see her own beauty;  the searing “The Gentry,” a pointed commentary on the cultural erosion that often comes in the aftermath of gentrification; the transfixing “Like Dakar,” a melancholy meditation on the cultural displacement of Harlem’s large Senegalese community; the spectral “Alien”, an inventive and brooding cover of Sting’s “Englishman in New York” that centralizes a Black working-class immigrant experience; and the prayerful title-track ballad “Holy Room” which closes the set and features a haunting kora-like solo by Hervé Samb.

When conceiving of the title of this live recording, the impact the coronavirus pandemic has had on the performing arts community shaped Somi’s thought process. “So many of us have had our livelihoods completely devastated,” she says. “Usually the stage is where we go to release our pain.  There is something so heartbreaking about the image of silenced theaters, stages, and pianos everywhere.  They, too, are holy – as is the memory of freedom they invoke.”

The material from The Lagos Music Salon consists of the evocative “Ankara Sundays”; the stark ballad “Two-Dollar Day,” the only song without the big band, that features a stunning opening solo by Toru Dodo and tells the story of a Nigerian domestic worker;  “Last Song,” a dynamic composition that asks what matters most when tomorrow is not promised ; and Afrobeat-powered “Lady Revisited,” which reforms the lyrics originally penned by pioneer Fela Kuti, into a social commentary about domestic violence. The concert also showcases Somi reaching back into her early catalog with the rendering of “Ingele,” a mesmerizing odd-meter love song – performed in Swahili – that appeared on her 2007 debut album, Red Soil in My Eyes (World Village).

Throughout the majestic concert, Somi transfixes with her deft storytelling and lissome voice that in one instance can cradle a verse or passage with the care of mother tending a newborn then in another belt with controlled cathartic yelps, swoops, and wails. Weaving through slick African grooves and Beasley’s intricate, brassy orchestrations, Somi continues to make her mark as one of the most original vocalists today.  “Ultimately, I want this album to serve as a sonic road map back to the rooms that make artists feel most alive, most seen, and most understood,” she says, “There is something affirming, hopeful, and holy inside of them.  It would be wonderful to raise the visibility of the rooms and people most in need while doing that.”

Vocalist /writer Somi was born in Illinois to immigrants from Uganda and Rwanda and has built acareer of transatlantic storytelling.  Her last studio album, Petite Afrique (Sony/OKeh, 2017), a song cycle about African immigrants in the midst of a gentrified Harlem in New York City, won an NAACP Image Award for Outstanding Jazz Album. It was also the highly anticipated follow-up to Somi’s widely acclaimed major label debut The Lagos Music Salon (Sony/OKeh, 2014), which was inspired by an 18-month creative sabbatical in Lagos, Nigeria and featured special guests Angelique Kidjo and Common landed at the top of US and international jazz charts.  Both albums earned her ECHO Jazz Award nominations for Best International Jazz Vocalist.

Recently becoming a playwright, she was named a 2019 Sundance Theatre Fellow for her original musical about the great South African singer and activist Miriam Makeba that was set to premiere in Spring 2020.

Somi is also a Soros Equality Fellow, USA Doris Duke Fellow, TED Senior Fellow, and has held residencies at Park Avenue Armory, Robert Rauschenberg Foundation, Baryshnikov Arts Center and UCLA’s Center for the Art of Performance.  She is also the founder of Salon Africana, a boutique cultural agency that celebrates her fellow African artists.  Mentored by the legendary Hugh Masekela, Somi performed with him at Carnegie Hall in celebration of South African democracy.  She will return to Carnegie Hall with her own band in Spring 2021 as part of their inaugural Voices of Hope Festival that features a program of artists who use their music to raise awareness around social issues. In her heart of hearts, she is an East African Midwestern girl who loves family, poetry, and freedom. 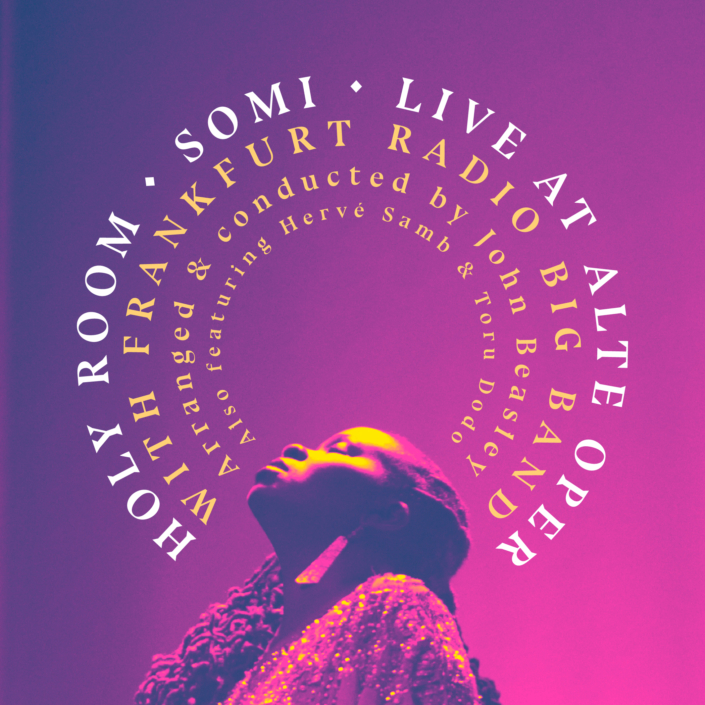