Terence Blanchard stands tall as one of jazz’s most-esteemed trumpeters and defies expectations by creating a spectrum of artistic pursuits. A twice Oscar-nominated film score writer/arranger (most recently for his Spike Lee collaboration on Da 5 Bloods), he’s also championed as a two-time opera composer whose Fire Shut Up in My Bones opens New York’s Metropolitan Opera 2021-2022 season—the first African American to have an opera at the Met. In addition, Blanchard teaches as the Kenny Burrell Chair in Jazz Studies at the UCLA Herb Alpert School of Music. But there’s a center of gravity. It’s Blanchard’s beautiful, provocative, inspiring jazz recordings that undergird all these projects. The same holds true now as it did early in his career in 1994 when he told DownBeat: “Writing for film is fun, but nothing can beat being a jazz musician, playing a club, playing a concert.”

In his thirtieth year as a recording leader, the six-time GRAMMY winner delivers Absence, a masterwork of sonic zest in collaboration with his longtime E-Collective band and the acclaimed Turtle Island Quartet—led by violinist/artistic director David Balakirshnan and featuring Gabe Terracciano on violin, Benjamin von Gutzeit on viola, and Malcom Parson on cello—a game changer since its founding in 1985 as a group playing hybrid music. It may seem like an irregular pairing, but Blanchard discovered that the quartet proved a perfect fit. “Obviously I’ve worked with strings in my career,” he says. “But Turtle Island has reimagined the language for the string quartet. It’s extremely unique, and what they do is brilliant. Playing together, it’s like a chamber jazz ensemble.”

Recorded in February 2020 at the Mo Austin Recording Studio at UCLA just before the Covid-19 lockdowns, Absence started out as a project to show gratitude to Wayne Shorter. “I knew that Wayne wasn’t feeling well at the time, so I wanted to honor him to let him know how much he has meant to me,” says Blanchard who today lives in Los Angeles as well as in his native New Orleans. “When you look at my own writing, you can see how much I’ve learned from Wayne. He mastered writing compositions starting with a simple melody and then juxtaposing it against the harmonies that come from a different place to make it come alive in a different light. That’s what makes the beauty of it. This album is about composition—not just his works but writing our own music to see how much he’s influenced us.”

As in past E-Collective recordings, Blanchard gives free reign to his synth-inflected ensemble—pianist Fabian Almazan, guitarist Charles Altura, bassist David Ginyard, and drummer Oscar Seaton—to stretch as a band. “I give them the room to explore as arrangers,” says the leader. “It’s important for the band itself as well as for my own growth to develop new ways of playing other people’s music. The guys do things that I would have never thought. We try to create something unique. With Wayne, we have the chance to learn his music and really absorb it. Then we give our own impressions.”

Five Shorter tunes are spotlighted on Absence, in addition to originals by Blanchard, Altura, Balakrishnan of Turtle Island, and two by Ginyard. Almazan was excited to dive into Shorter‘s music. He arranged “The Elders,” with a joyous open, pulsing drums and Collective drama. He arranged the quartet to beautify it with color and textural support. On his synth-fueled trumpet, Blanchard squealed and screeched in avant playfulness. “This is a Wayne tune where there’s not much in the way of improvisation,” he says. “We stretched and created room to play solos that develop the thematic idea.” In the first take of the tune, the band caught a vibe at the end that lengthened it. Instead of having a long version, Blanchard cut it up and made it into “More Elders,” the track that comes at the end of Absence. “It was too cool,” he says, “and we didn’t want to lose it.”

Almazan radiantly arranged “When It Was Now” with a subtle art-of-the-strings groove. Blanchard says, “It kills me. I didn’t know how Wayne can write something funky without being funky. It’s got that vibe. It’s crazy, but he’s writing a beautifully melodic tune. What can you say? He’s the master of allowing ideas to be what they’re supposed to be. Fabian gets that. And it takes courage to explore and see where it can go.”

Blanchard singled out two of his favorite Shorter tunes to arrange: “Fall,” originally recorded on Miles Davis’s 1968 album Nefertiti, and the classic “Diana,” written for the daughter of Flora Purim and Airto Moreira and recorded on his 1974 album Native Dancer. In the former, quiet and calm weigh in on the melodic beauty as the strings pacify and the leader blows with an emotive expression. “It took me a long time to realize that the bass line is the melody,” he says. “That blew me away. Just because the bass player is playing it, you won’t think it’s the melody. It’s a simple idea that develops over time.” The latter is special: “I was floored when I first heard it. That was a later period for Wayne, and here he was being so creative. I remember listening to that record and hearing his sonic choices.”

Originals on Absence include Altura’s sober, synth-infused composition and arrangement of “Dark Horse” that Blanchard praises for its melodic sense and harmonic knowledge that allows him to improvise in a unique way. “Charles is one of the most underrated guitarists out there right now,” he says. “I keep telling him that it’s going to take a minute for people to catch up with who you really are. Just listen to his solo at the end of the piece where he goes into a whole other world.” As for why only E-Collective plays the tune and the string quartet sits out, Blanchard says, “We wanted variety. I remember when I started writing for orchestras. Someone gave me good advice: we don’t have to play all the time.”

Ginyard offers two gems, including the album title tune. “Absence” opens with Almazan’s gentle piano then changes shape with the E-Collective power and the Turtle String flair. “When DJ joined the band three or four years ago, he wanted to talk to me about composition,’ says Blanchard. “When we were in Europe, we had a two-hour ride to our next show. We talked and he wrote in his notebook. I showed him the technique I teach in my classes. Right after our conversation, he wrote ‘Absence.’ I could see he had talent for writing melodies that a lot of people don’t have.” Originally the tune was slated to be on the last E-Collective album, Live, but it didn’t make the cut because of time constraints. Blanchard assured him that they would record it. “I said trust me,” he says. “And look, it’s become the album title. It was an opportunity for DJ to write arrangements for a string quartet. We all had a ball playing it. It was a great experience.”

Ginyard also contributed an atypical tune for jazz: a two-and-a half-minute number,
“Envisioned Reflections.” It’s a musical story with mystery and dreaming. “I asked DJ, are we going to solo on this?” says Blanchard. “And he said, no that’s it. And I thought, dude, you’re not the normal jazz musician.” Ginyard also arranged a minute-long intro with the quartet only.

Turtle Island appears without the E-Collective on the buoyant Balakirshnan suite-like tune, “The Second Wave,” that is playful, bluegrassy, string-grooved. “I said it would be a shame to not hear what you do,” says Blanchard. “So, I asked David to write a piece. It’s just so great to be around musicians who want to create and explore.” The full band did a five-camera video shoot of the tune for this fall’s Hardly Strictly Bluegrass festival in San Francisco.

Blanchard also contributes one original, “I Dare You,” that also includes a Turtle Quartet introduction. The rhythmic tune features the ensemble in full force in a turbulent, stormy setting with a menacing trumpet clarion call. The title comes from a phrase Wayne used when he was interviewed on Tavis Smiley’s TV show. He said, “Jazz means I dare you.” Blanchard says, “I thought that was so brilliant. You stick your neck out and take chances.” The Wayne-ism resonated with Blanchard’s daughter Sidney, also a musician. On her graduation sash, she put the words I Dare You and even tattooed the phrase on her arm.

Blanchard’s youngest daughter, Jordan, also plays a role on espousing the wisdom of Shorter. She’s become a good friend with him, often visiting him and having cosmic conversations and watching films from his vast collection. She wrote a short essay for the liner notes that reads in part, “The weight of being is measured in absences…Wayne Shorter is known to bestow grace upon us when we are restless in absence.”

Absence came together quicker than any of Blanchard’s other projects. He had been in conversation with Turtle Island, which had originally discussed plans for him to arrange a piece for string quartet, but those talks shifted direction. Two weeks later they were all in the studio. “What made it all so beautiful was that it was for Wayne,” says Blanchard. “He’s a funny dude, silly and brilliant. He has inspired us all. When you think about it, Wayne had come up with John Coltrane, Sonny Rollins, Sonny Stitt, Johnny Griffin, Cannonball Adderley. He came through all those guys, but he found his own voice, his way of expression. You have to give him credit, not only on his horn but also with the pencil. That’s what makes him such a great jazz artist.” 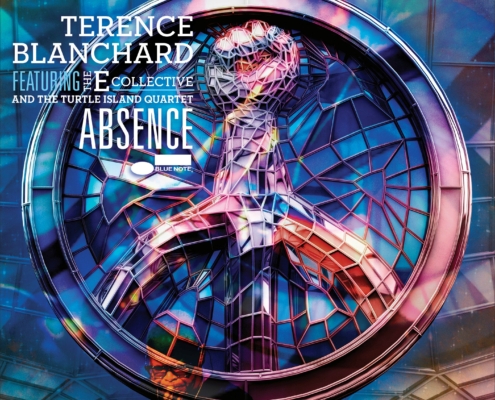 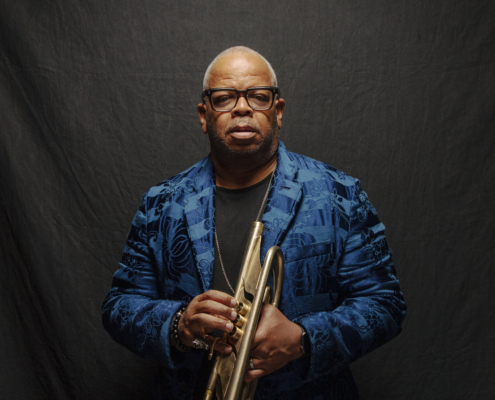 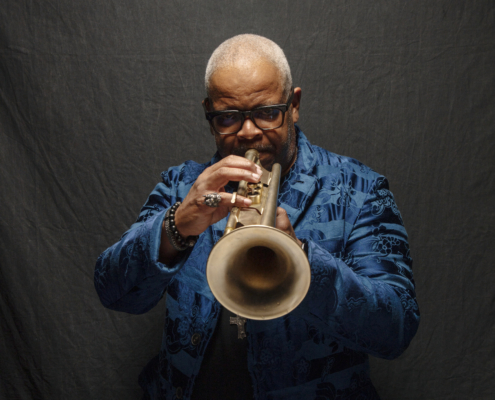 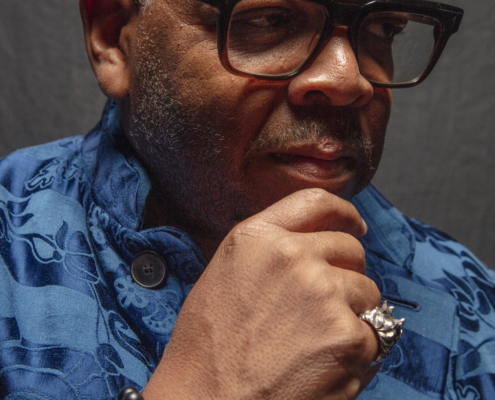 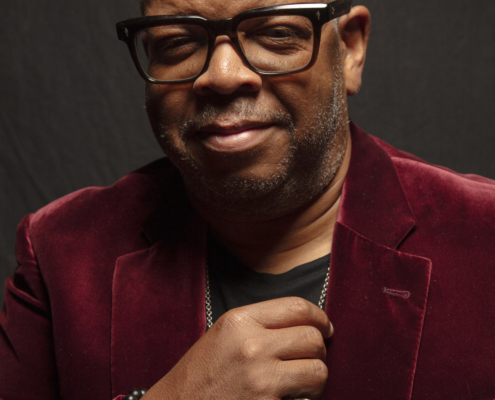 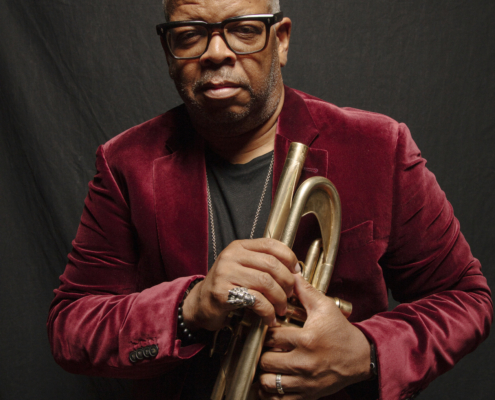 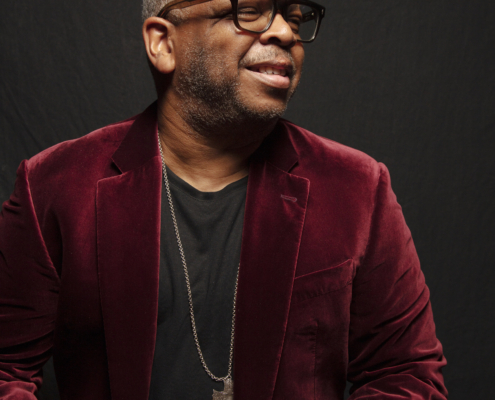