While New Orleans native Louis Armstrong passed away in 1971 at the age of 69, today his legacy as the kingpin of jazz continues to grow. The most significant example of this is the ensemble The Wonderful World of Louis Armstrong All Stars, comprised largely of top-of-the-line Crescent City musicians paying tribute to him with the brilliant album A Gift to Pops. The inventive re-envisioning of music associated with the trumpeter/vocalist during his five-decade career features new arrangements and new performances of stalwart tunes ranging from the “The Peanut Vendor” (recorded by him in 1930) to “What a Wonderful World” (recorded in 1968 and the most successful tune of his career). Special guests include Wynton Marsalis and Common.

“We decided to make a recording that captures the essence of Pops,” says co-producer Wycliffe Gordon, who is well-versed in the music but is the only member of the band not born in New Orleans. “We wanted to perform the music the way he might have played it if he were still alive. We all had ideas for how to pull this off, by including songs influenced by gospel, the blues, the traditional brass band sounds, popular music and rap.”

In the liner notes, impresario George Wein wrote: “With this recording, this music of Louis Armstrong demonstrates how he created the language of jazz and influenced all the music that followed—from swing to bebop and even to rap, as demonstrated by Common. But there’s one thing for sure: This band and record demonstrate that there was nothing common about Louis Armstrong.”

The project emanated in 2018 by the Louis Armstrong Educational Foundation through the recommendation of Jackie Harris, executive director of LAEF, to celebrate the 50th anniversary of the New York organization founded in 1969 by Louis and his wife Lucille “to give back to the world some of the goodness he received.” Harris says the recording was a team effort started by the Foundation and the wonderful musicians who appear on this recording.

“We wanted to make this recording of the major 20th century artist who instructs and intersects with artists of the 21st century,” says Harris. “All the musicians we asked to participate, even Wynton and Common, were honored to be a part of this. Each artist had a say on the music. We allowed all the musicians to put their own signatures on the songs.”

Harris notes that the 50th anniversary is a tad late, but other factors interceded, including the difficulty of recording during the pandemic and some artists living in different cities around the country and contributing in different studios.

Nicholas Payton, who arranged seven of the songs, plays emotive and thrilling trumpet with engaging solos throughout, including on his own arrangements such as the swinging, party-like rendering of “Strutting with Some Barbeque,” the lyrical, bluesy “A Kiss to Dream On,” and the playful “I’ll Be Glad When You’re Dead,” with the devilish vocals by Gordon, drummer Herlin Riley and bassist Reginald Veal.

Payton takes the lead vocals on his modern arrangement of Fats Waller’s “Black and Blue,” a tune about racial consciousness and prejudice, that starts out wild and frantic before the bass and drums take it into an R&B-flavored groove. In the midst of the tune, Common delivers his rap poetry on the theme that includes lines such as, “Went through black and blue for the bright day,” and “My school of thought is black openness/To define and redefine what the culture is.”

Wycliffe comments: “Common added a different spin to the tune. It seemed like things we had talked about as a country had changed, but they didn’t, which is why this is important.” Harris adds: “We’re hoping Common will draw young people into Louis Armstrong. We’re out to make changes.”

Arrangements are also offered by Gordon on “Up a Lazy River” with his and Riley’s vocals; Veal’s “Just a Closer Walk with Thee” gospel hymn; pianist Davell Crawford diving into the blues by singing “Rockin’ Chair” by Hoagy Carmichael; and Riley’s percussion-spiced, festive take on “The Peanut Vendor,” where he sings with a gravelly voice and Marsalis joins in on the fun with an extended solo.

„Louis Armstrong’s singing, playing and his interpretations illuminate timeless human fundamentals,” Marsalis says. “His grace, eloquence, intelligence and naturalness are still showing us how to play and what playing means. Rightfully beloved across the world, he embodied what is best about America. In these trying times, his music and memory are the perfect inspiration for us to rise up and be the very best of ourselves as artists, citizens and as people.”

Pops himself stars in the bookends of the album. The CD version opens with a take on “When It’s Sleepy Time Down South” with Pops in his charismatic mode of trumpeting and singing with his sextet. It was recorded in 1964 in Sparks, Nevada and had been discovered on a tape in Louis’ personal collection a couple of years ago. It is now part of the Louis Armstrong House Museum. The album closes with a short, taped excerpt of him expounding in conversation on “Philosophy of Life.”

Wein weighs in on this compelling collection in his liners: “After listening to A Gift to Pops performed by The Wonderful World of Louis Armstrong All Stars and produced collectively by Wycliffe Gordon, Jackie Harris and Nicholas Payton, I am happy to advise the true Louis Armstrong fan that his music is alive and well with this fascinating group of New Orleans musicians.”

After listening to the CD “A Gift to Pops” performed by the Wonderful World of Louis Armstrong All-Stars and produced collectively by Wycliiffe Gordon, Jackie Harris and Nicholas Payton, I am happy to advise the true Louis Armstrong fan that his music is alive and well with this fascinating group of New Orleans musicians.

Having been born in 1925, there are not too many left from my era with whom I can share my youthful musical experiences.  I was first immersed with Pops on a recording of “When the Saints go Marching In” in 1938-39.  After noticing in Downbeat when Harry James, (who had just won Best in Trumpet), said that Louis Armstrong should be the winner as he “was the greatest of all trumpeters,” it further pushed me into the world of Louis Armstrong.

In his later years, Pops had several hit records.  “Mack the Knife” was big and “Hello Dolly” was number one, displacing The Beatles. Versions of two other successful songs appear here: “What a Wonderful World” and “Give Me a Kiss to Build a Dream On.” The balance of the tunes on this recording are all familiar to me from Louis’ repertoire of the late 1920s and 30s.  To hear Wynton Marsalis play “Peanut Vendor” from 1930 was a joy, as I haven’t heard that tune in many years.  “Struttin’ with Some BBQ” is from the 20s, “I’ll be Glad When You’re Dead You Rascal You,” (“I’ll be standing on the corner high when they bring your body by” flips me out) “St. Louis Blues,” “Swing that Music,” and “Black and Blue” all bring back memories of all the wonderful hours of music that became so important to me.

Few musicians who matured after the language of Bebop and Charlie Parker took over the jazz world were able to go back and carry the melodic and excitement of the swing era.  It’s interesting to me that Wynton Marsalis born in 1961, and Nicholas Payton born in 1973, both swing in each way.  That they fully understand and appreciate the genius of Louis Armstrong and can personally evoke it is refreshing to me and I am sure it is to any lovers of Pops.  Wynton appears on one number on this recording, but Nicholas’ strength, talent and creativity carry the ball through almost every composition. I’m continually amazed at his talent. Two additional trumpeters, Ashlin Parker and Wendell Brunious,  add to the joy of this album.

The rhythm section – Herlin Riley on drums, with whom I have had the pleasure of working, Reginald Veal on bass, Don Vappie on banjo and Davell Crawford  on piano are born swingers. I was impressed by the saxophone player, Roderick Paulin, with whom I was not familiar, but who I will be paying attention to in the future.

Louis Armstrong was as famous for his singing as he was as a trumpet player.  Since then, just about every musician I have ever known would like to be a singer.  There is a reason for this, because no matter how well you play an instrument, musicians feel they communicate more directly by singing a song themselves.  This group is no exception.  Wycliffe Gordon, who by the way, is a musician who could have been a part of the contemporary music scene, but has given it up to become a major figure in exploiting and preserving the joys of traditional jazz, loves to sing. As does Herlin Riley.  Even Reginald Veal sings a chorus on “Glad When You’re Dead, You Rascal You”.

But it is Davell Crawford, a singer and a pianist, who steals the day with his version of Hoagy Carmichael’s “Rocking Chair.”

Fats Waller, with lyrics by Harry Brooks and Andy Razaf, wrote a song called “Black and Blue,” which was extraordinary for its racial consciousness in the time in which it was written.  Nicholas Payton plays a beautiful solo and sings the words with deep feeling and meaning.  In addition, Common was invited as a special guest to speak the words of this vital statement of the prejudice and sickness of society which, in many respects, is still with us.  He is joined by Big D Perkins on guitar.  This is an unforgettable musical statement.

Back in 1970, I had the good fortune of filming a tribute to Louis Armstrong at Newport. Among the guests were Mahalia Jackson (I’ve always said about Mahalia – if we could hear the angels sing, they would sound like Mahalia.) I asked Mahalia and Louis to sing together and they chose “Just a Closer Walk with Thee.”  It was an historic moment.  Here, Reginald Veal, Davell Crawford and the Wonderful World of Louis Armstrong All-Stars pay homage to Louis and Mahalia in their rendition of this gospel standard.

A long time ago, 1950 to be exact, I took the biggest leap of my life and opened up a club in Boston called Storyville.  The only experience I had as a club owner was having played in jazz clubs on the Boston scene.  All my life, I’ve followed where motivation took me and have had the joy of success and despair of failure.  The band I opened with at Storyville was Bob Wilbur featuring Big Sid Catlett on drums.  Big Sid had been Louis Armstrong’s drummer for many years.

Louis Armstrong and the All Stars with Jack Teagarden, Earl “Fatha” Hines, Cozy Cole, Barney Bigard and Arvell Shaw were playing a concert at Symphony Hall. My instincts as a promoter took hold.  I gave Big Sid the night off and told him to get those guys to come to the club as my guests when the concert was over.  Not only did they come to Storyville, they brought their instruments and one by one they went directly to the bandstand. I had been in business for three weeks at that time.  With all the musicians on the stage, Pops came in and walked right to the microphone and sang “Sleepy Time Down South” and forever changed my life. The excitement and electricity created by Louis Armstrong at Storyville in Boston on a September night in 1950 made me realize what my career would be ad infinitum.  “A life in jazz.”

With this recording, the music of Louis Armstrong demonstrates how he created the language of jazz and influenced all the music that followed – from swing to bebop and even to rap, as demonstrated by Common.  But, there’s one thing for sure: this band and record demonstrate that there was nothing common about Louis Armstrong. He was one of the most extraordinary men I have ever known. 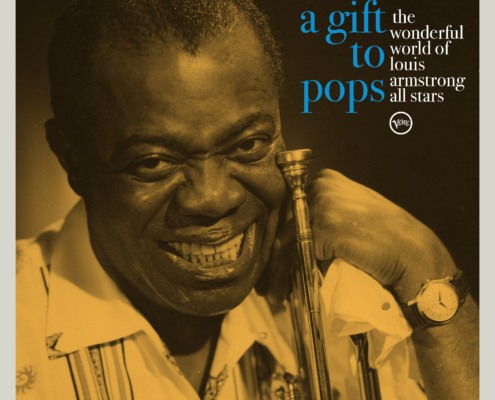 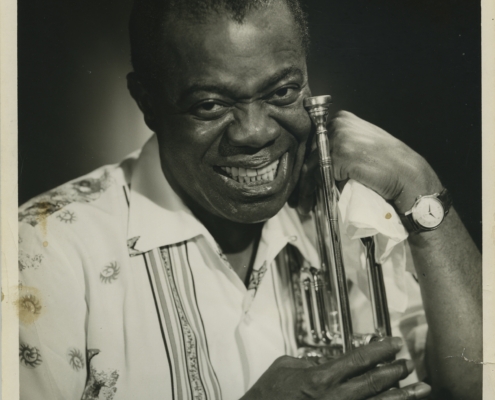 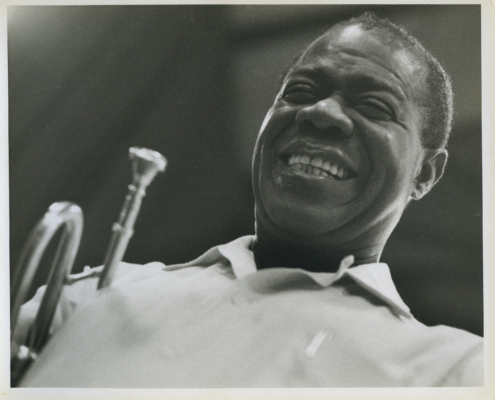 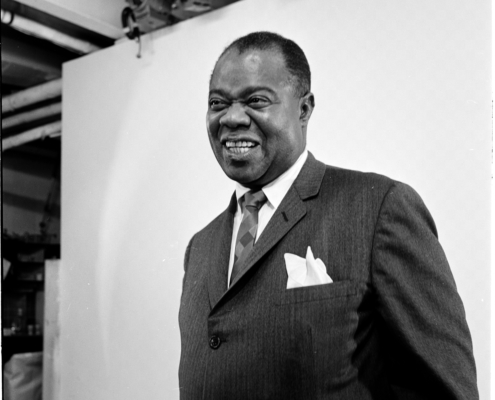 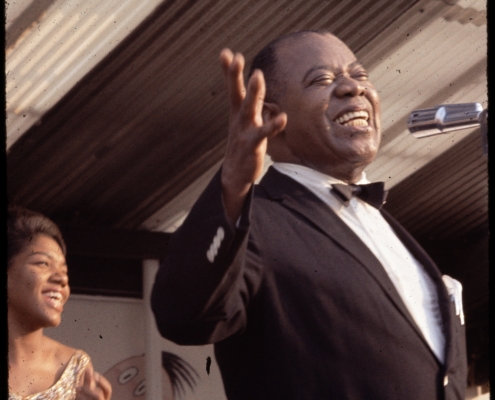